She lost her legs but not, “will” to be a doctor

“I am thankful to Allah for giving me the courage to continue my studies. I am now preparing for MD entrance. I want to start a hospital in my ancestral village in Azamgarh:” Raushan Jawwad 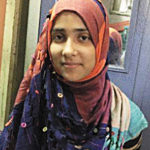 Mumbai: In an instance of triumph of will over circumstances, Raushan Jawwad, a 24-year-old girl from Jogeshwari, Mumbai, who lost both her legs to a train accident in 2008 and later moved the Bombay high court to study medicine, managed to get the prefix of “doctor” attached to her name recently.
Jawwad Shaikh, her vegetable vendor father, and mother Ansary Khatoon, a homemaker, had tears in eyes when they saw people clap for their daughter while she was being conferred with the MBBS degree during the convocation ceremony.
Nine years after the accident, Raushan has become the first doctor in her family. A bright student, she scored 92.15% in her Class X exam in 2008. A few months later, she was pushed out of a crowded local train. She was on her way home after writing her college exam papers at Bandra’s Anjuman-i-Islam Girls College in the train when she fell on to the tracks and lost her legs under the moving train. Hearing Raushan’s screams, some commuters pulled the chain and the train was stopped. It took her a year to pull herself out of the trauma and resume her education.
“I am thankful to Allah for giving me the courage to continue my studies. I am now preparing for MD entrance. I want to start a hospital in my ancestral village in Azamgarh, where many people face medical problems due to non-availability of good hospitals,” Raushan said. She expressed willingness to work for the poor in villages near Mumbai too. Last year, Raushan secured a first class in the final-year MBBS exam at KEM Hospital.

While the law allows only people with “up to 70% handicap” to study medicine, she was found to be 88% handicapped post the accident. To continue her education, Raushan had to put up a struggle. She approached the Bombay high court seeking its intervention to secure an admission. Despite qualifying for the entrance exam, the government found her “unfit” to study medicine. The then high court Chief Justice Mohit Shah directed the state to give her admission. “When she can come all the way to court, why do you think she won’t be able to come to class?” asked Justice Shah.
Raushan stays with her parents, an older brother and younger sister in a 10-by-10-foot rented room in a Jogeshwari chawl. “While studying at KEM, I used to stay in a college hostel. All my classmates, colleagues and teachers helped me a lot. The credit for my success goes to them too. They would always be very helpful and I never felt disabled when in their company,” she said. When the Times of India first reported the accident, several people came forward to help Raushan financially. But her family did not even have a bank account.
(Extracted from http://www.timesofindia.indiatimes.com)