The Man Behind Mukkam Orphanage in Kozhikode 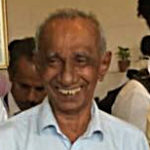 Mohammed Mon Haji. Haji, who was well known across Kerala for his commitment to take care of orphans, breathed his last at the Christian Medical College in Vellore, Tamil Nadu. He had been undergoing treatment after he suffered renal disease. He was 75 years old. Haji was active in running the orphanage based in Mukkam. He was bold and unflinching when it came to ensuring a better life for orphans.
After the demise of his elder brother Moideen Koya Haji, Mohammed Mon Haji selected Mukkam orphanage as his working field. Since 1983, Haji was active in various roles. He was vice president of the orphanage. After completing his graduation, Haji pursued his studies in Islamic Studies at Baqiyat Salihath Arabic College in Vellore. A state executive member of IUML, Haji was elected as the member of Kozhikode district panchayat.
(Reported by Shafeeq Alingal, Twocircles.net)