Tribute – Muhammad Ali – An Icon of Peace and Philanthropy 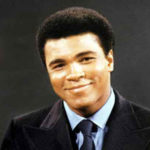 World famous boxing champion and peace activist from the USA Muhammad Ali recently breathed his last, at the age of 74. At the age of 42, and just a few years into retirement from boxing, Ali was diagnosed with Parkinson’s disease. Never one to accept defeat and with a keen ability to inspire hope in others, Ali used his diagnosis to raise awareness and funding for research on the progressive neurological disease.
But it was not just his fighting attitude, but his religious belief, that kept him moving forward. Dawud Walid, Executive Director of the Michigan chapter of the Council on American-Islamic Relations (CAIR), said Ali’s trust in God helped his perspective, after receiving, what would be a devastating diagnosis for someone who had been so active. “I remember him saying that he was humbled by God allowing him to have a disease, to show him who was really the greatest, that God is the greatest,” he said. “Ali would say, there was a hidden blessing in it.” By being so public about his diagnosis, Walid said Ali was able to show the world that one can still have courage and hope in the face of suffering.
Ali, who was born, Cassius Clay, converted to the Nation of Islam, a controversial American sect that advocated racial separation. He later switched to mainstream Sunni Islam and to Sufism. He would openly talk about his belief in God and the virtues contained in all the world’s religions.
Relinquishing his heavyweight boxing title in order to promote a culture of peace, Ali became firmly enshrined in the pantheon of the world’s great peace icons. In 1998, he was named as United Nations Messenger of Peace. Ali was also the recipient of Amnesty International’s Lifetime Achievement Award, Germany’s Otto Hahn Peace Medal, and the Presidential Medal of Freedom. He negotiated the release of 15 American hostages from Iraq during the first Gulf War, spearheaded reconciliation programs in South Africa and Vietnam, delivered medical aid and supplies to Cuba, and traveled to North Korea and Afghanistan as a goodwill ambassador. He raised millions of dollars for Parkinson’s research, distributed meals to homeless families in the United States, and participated in the Make-A-Wish Foundation and the Special Olympics.
Muhammad Ali’s dedication to global peace, public diplomacy, and philanthropy exemplified his foundational belief in Islam as a religion of peace. After 9/11, Ali publicly denounced terrorism while promoting the core values of Islam”peace, charity, humility, justice, beauty, and grace. Reflecting upon his unique faith journey, Ali said, “I set out on a journey of love, seeking truth, peace, and understanding.”