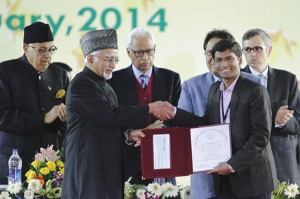 Kolkata: A young researcher from West Bengal beat poverty to bag the Young Scientist Award 2013-14 of India. The young Botanist, Kutubuddin Ali Molla, who hails from a very poor family in North 24 Parganas district received the honour for his research on “Development of Transgenic Rice Plants for Sheath Blight Resistance”.
The young scientist was felicitated on February 7, 2014 at Jammu University by Vice President of India Hamid Ansari with a cheque of Rs 25000 and an Award Certificate in the field of Agriculture and Forestry Sciences.
Chief Minister of Jammu and Kashmir Omar Abdullah and Governor of Jammu Kashmir N N Vhora, Former CM of JandK Dr. Farooq Abdullah were also present in this award ceremony.
Kutubuddin is currently posted as a scientist trainee at National Academy of Agricultural Research Management in Hyderabad.
Originally from a remote village of Joygram in North 24 Parganas, his father Illias Molla is a farmer and grandfather Nasim Molla was a social worker. With only three Bighaa of agricultural land in a joint family, Illias Molla was not able to fulfill all the needs of the family; his eldest brother Yusuf Molla, however, financially supported his bright nephew in times of economic-crunch.
As a young boy, Kutubuddin also helped his father in the agricultural fields and learnt several things about paddy cultivation that developed his interest for becoming an agricultural scientist. Stricken by poverty, his father told him, he will not stop him from studying, but was is not in a condition to financially support him and hence he would need to manage the expenses from somewhere.
After completing his senior secondary from Joygram JN High School, Kutub took admission at City College in Kolkata in B.Sc (Honours) in Botany. As the college was about 60 km from his village, he shifted to a hostel near the college on a nominal fees of Rs 50.
Kutub is very grateful to his Professor in college, Dr Argha Hait, who helped in several ways. After graduating with first class, he took admission for post-graduation in Calcutta University, which he completed with first class and ranked third.
All this while, he gave private tuitions to support the expenses of his study and staying in Kolkata. Meanwhile, he also cleared the Junior Research Fellowship (JRF) of the Council of Scientific and Industrial Research (CSIR), GATE, ICAR (NET) and ARS tests.
He took admission in PhD under Dr Karabi Dutta in 2009 in Plant Molecular Biology and Plant Biotechnology. He did his PhD research (PhD award still awaited) on transgenic rice and published a research article in a Research Journal of the British Society on `Molecular Plant Pathology’ in 2013 that attracted the attention of the agricultural scientists in the country.
He then participated in an All India Young Scientist Award Competition and was selected for the Best Young Scientist Award of India in the field of agriculture for 2013-14.
Speaking to Two Circles Net over phone from Hyderabad, Kutubuddin thanked Almighty Allah for the honour.
(Twocircles.net)