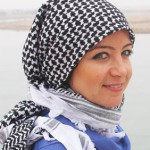 A Syrian-based journalist who has trained citizen reporters in the war-ravaged country has been named the recipient of the 2015 Peter Mackler Award for Courageous and Ethical Journalism. The prize from Reporters Without Borders and Agence France-Presse was awarded to Zaina Erhaim, who lives and works in Aleppo, Syria. Over the last two years, Erhaim has trained about 100 citizen reporters from inside Syria, approximately a third of them women, in print and TV journalism, and helped establish new, independent newspapers and magazines in the country.
The 30-year-old Erhaim is also the Syria project coordinator for the Institute for War and Peace Reporting (IWPR), an international organization that supports journalists in countries undergoing conflict, crisis or transition. The work of some of her students has been published in major international news outlets.
“Zaina Erhaim is a force multiplier of journalistic values in a
country torn by violence and irrationality,” said Camille Mackler, the Peter Mackler Award’s project director. “We salute her courage, upholding professional ethics and bringing them to the service of those left to write history.” David Millikin, AFP’s director for North America, said Erhaim “embodies the ideals which the Peter Mackler Award was created to honor.” He added that Erhaim “has done extraordinary work both in training local residents and journalists who have become nearly the only first-hand source of news on the Syrian conflict and in supporting Syrian women living under siege.” The award, named for the late Agence France-Presse journalist Peter
Mackler, will be presented at a ceremony at the National Press Club in Washington on Oct. 22.
(www.arabnews.com)