Islamic Voice 0 September, 2015 12:00 am
Contemporary Muslims are in Need of Spirituality
Scientific Research – Are these the Dark Ages in the Muslim World?
The Muslims’ Intellectual Decline 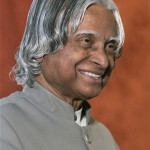