Islamic Voice 0 September, 2015 12:00 am
The Muslim World Is Going Backwards – And the West Isn’t To Blame
Eid Moon and the Lunar Calendar
A Muslim Vision to Spread Inter-Community Goodwill 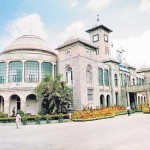 Bengaluru: Reputation of the Congress Government in Karnataka took a beating as the BJP won the majority of seats in the Bangalore Mahanagar Palike (Bangalore Municipal Corporation) election held on August 22. The BJP won in 100 of the 198 wards. It had 112 seats in the previous tenure. The Congress though improved its position from 65 in 2010 to 76 this time, will have to sit in opposition for the second time in a row. The Janata Dal Secular won 16 seats, one more than the last time. A lone candidate of the Social Democratic Party of India (SDPI) won from a seat. The Majlis e Ittehadul Muslimeen which had put up candidates in several wards, drew a blank.

Congress Improves
Though Congress has vastly improved its position, the BJP can comfortably retain the administration of the city by electing a mayor. With MPs and MLAs also being part of the process of election of Mayor, the electoral college for mayoral election consist of 153 with MLAs, MLCs, MPs belonging to the City also included among the voters. The BJP can easily muster 123 on its own and can expect a few others (chiefly those who rebelled against the official candidate and won) to vote in its favour.
The Congress Government in the State which was keen to postpone the election and go for trifurcation of the unwieldy BBMP, was forced into holding the election by the Supreme Court.

Somnolent Congress
The party rose late and went into the campaigning in a somnolent mood. Yet its performance was better than what was being imagined, looking at the well-oiled machinery and aggressive style of the BJP. Almost midway in its 5-year term in the State, the Congress will need to pull up its socks if it desires to be in the reckoning for the next Assembly elections in April 2018. The Party has largely ignored the urban areas of the State, although over 38% of the State’s people live in cities and towns. BJP’s major focus has been on electorate in urban areas and Congress has been largely banking on OBC population residing in rural area. With rapid changes in rural/urban demography, the party would have to devise new strategies to reach out to the youth.

Deficiency of Vision
The State Government headed by Mr. Siddramaiah has shown a deficiency of vision in addressing the new entrants in cities from the rural areas. With majority of jobs being created in the private sector and in and around Bengaluru, the State Government would have to plan diversification of growth to other areas of the State. Karnataka has seen a massive jump in higher education, especially those completing engineering degree and technical diplomas. But a fresh graduate cannot aspire to find a job that could bring him Rs. 10,000 a month in any city other than Bengaluru. And those that flock to the city have to shell out a heavy chunk of these salaries towards housing and commutation thereby nullifying their dreams of an early marriage and settling in life. Overheated realty in Bengaluru has made the life unaffordable in the city. Frustrated youth therefore find no solace in Government policies.
The number of the corporators from the Muslim community rose up from 12 to 16 this time. Of these 12 belong to Congress, three to the Janata Dal Secular and a single to the SDPI.
Those belonging to Congress are: 1- Azmal Baig, Bapujinagar 2- Mohd. Rizwan Nawab, Gurappanpalya; 3- Abdul Wajid, Manorayanapalya; 4- S. Ansar Pasha, Banashankari Temple; 5- Mohd. Zameer Shah, S. K. Garden; 6- Syeda Sazida, Muneshwaranagar; 7- Abdur Raqeeb Zakir,Pulakeshinagar; 8- Noushir Ahmed, K. G. Halli; 9- Irshad Begum, Nagawara; 10- Shakeel Ahmed, Bharathinagar; 11- Fareeda, Shivajinagar; 12- Seema Althaf Khan, J. J. R. Nagar. Nazima Khanum from K. R. Market, Umme Salma from Khushahal Nagar, and Imran Pasha from Padrayanapura were elected on JDS ticket. Mujahid Pasha won on the SDPI ticket from Siddapura. Curiously, the BJP too had put up five Muslim candidates this time, though none of them could score a victory.