There is no reason why students of Urdu-medium schools should not be enabled to speak excellent English.

I am from Old Delhi. I was born in Ballimaran our house was just a short distance from where the famous Urdu poet Mirza Ghalib had lived. Ours was an Urdu-speaking family. I studied in an Urdu-medium government school, where the monthly fees was, in those days, 10 paise! After that, I enrolled at the Anglo-Arabic Senior Secondary School, which was also an Urdu-medium school.
In the 9th standard, I chose to study Science: it was a subject that I was deeply interested in. However, people wondered how I, a student of an Urdu-medium school, would manage as Science was taught through the medium of English. I soon realised that there was hardly any material on Science available in Urdu.
In 1992, in order to address this lacuna, I started writing articles on science-related issues in Urdu. I would send them to popular Urdu newspapers that were read by a wide cross-section of the Urdu-speaking public so that they could have a broad reach. Later, I launched the Urdu monthly magazine ‘Science’, which is still being brought out.
Some people claim that the problem that Urdu faces today is because it now has almost no link with employment. I do not agree with this. Numerous schools and universities advertise for the post of Urdu teachers but these posts remain vacant as there aren’t enough sufficiently qualified applicants. The problem lies in the fact that in many cases, even families that consider themselves ‘Urdu-speaking’ have stopped speaking the language. That is why Urdu has declined. Somehow, some people wrongly believe that Urdu is synonymous with backwardness and English with progress.
English is the language of today, and it is not surprising that many people want their children to excel in that language. That is perfectly understandable. By all means study and excel in English, but that doesn’t mean that one should neglect other languages, including one’s mother tongue. There is no reason why students of Urdu-medium schools should not be enabled to speak excellent English. I know of a Hindi-medium school where the students’ English is in no way inferior to that of students in English-medium schools. There is the case of a Muslim-run school in Kolkata where students excel in four languages: English, Arabic, Hindi and Urdu.
Progress doesn’t mean that one should forget one’s roots and culture. Take the case of Japan. Japan has impressive economic and technological progress but its people haven’t given up their language. At the same time, we should be open to good influences from different quarters.
No language is superior or inferior. Each has its own value. I write on issues related to science in Urdu, but I do not advocate that one should engage in higher studies in Science in the Urdu medium. For that, one definitely needs to know English. Nature revels in diversity, and linguistic diversity is a fact of life. We need to accept diversity as such as it is a law of life. Different types of flowers put together make a beautiful bouquet. In the same way, one can learn various languages, each of which has its own place and value.
Urdu scholars need to reflect on how they can make the language a medium for intellectual communication and a means for Urdu-speaking people to acquire knowledge. One thing that they can do is to write on a range of social issues and publish their writings in popular Urdu newspapers and magazines and in this way reach a wide readership. 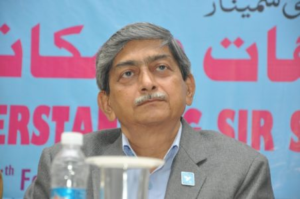