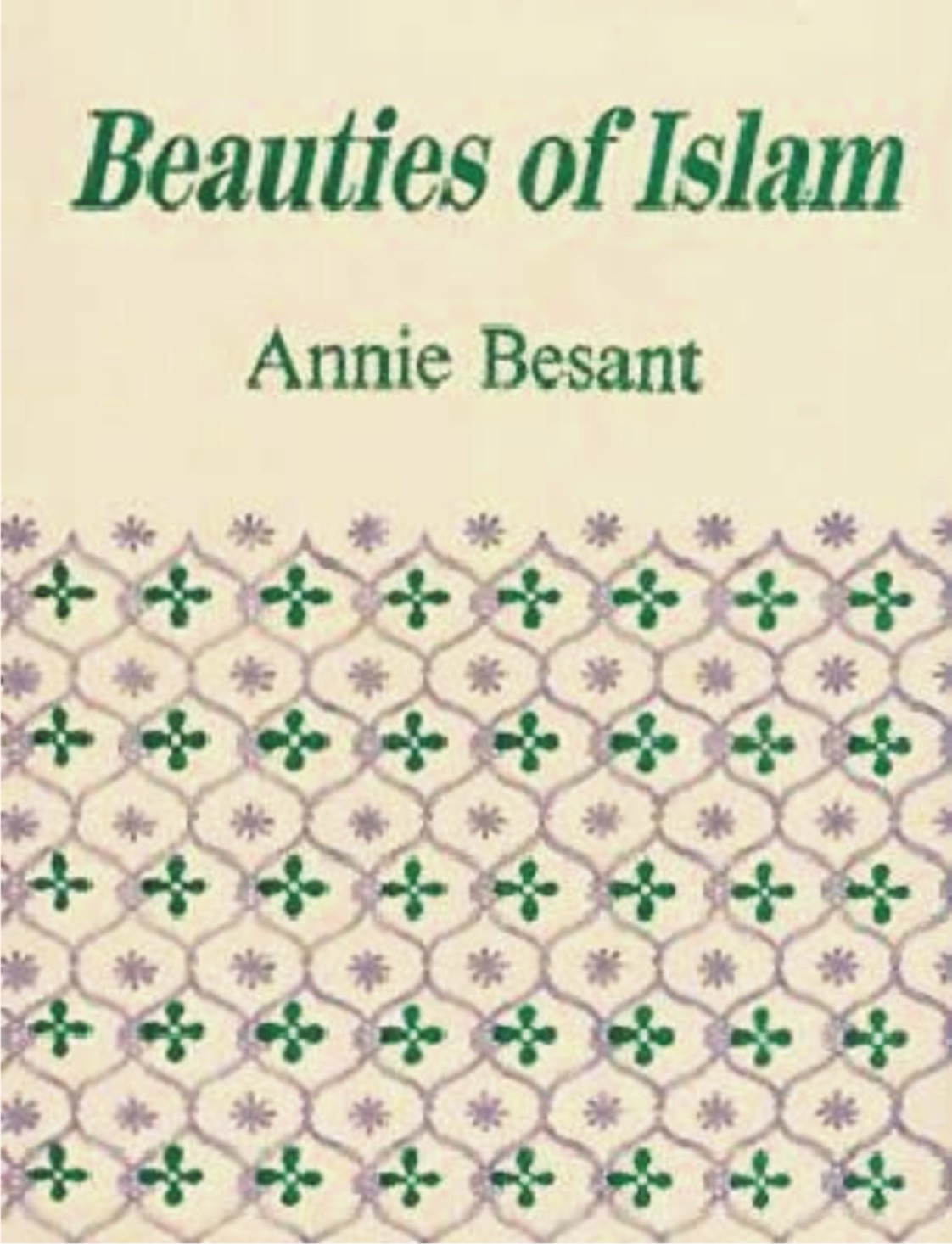 Syed Tahsin Ahmed 0 November, 2022 5:27 pm
One of the oldest Quran in the world will be presented in Paris
Ecological Significance of the Quranic Understanding of Humans as Custodians
Better Use of Time

Annie Besant (1847-1933) was a British socialist, theosophist, writer, orator, and women’s rights activist. Annie Besant first visited India in 1893 and later settled in India. In 1907 she became President of the Theosophical Society based in Madras (Chennai). She also actively campaigned for Indian self-rule.

In the year 1932, Annie Besant gave a talk on Islam in the light of Theosophy. She explains that ‘Theosophy’ is simply ‘Divine Wisdom’ and every religion in its turn has grown up from the great root of the Divine wisdom. This lecture was first published in the year 1912 by the Theosophical Publishing House, Adyar, Madras, and subsequently it was published many times in the form of a booklet with the title “Beauties of Islam”. It is interesting to know the views of Annie Besant on Islam from this booklet as it contributes positively to Inter-faith dialogue. I have no alternative except to quote extensively from the book in order to convey the author’s thought process in its original form.

Criticism Directed at Islam
Annie Besant rightly opines that Islam as a religion is often unfairly attacked because it is utterly misunderstood as to the greatness of its Prophet and the nobility of his teachings to the world. The three chief attacks the Westerns make against Islam are that it is fanatically persecuting and not progressive; that the position of women in Islam is not such as it should be and lastly that it does not encourage learning, science, and intellectual endeavour. She dismisses all these allegations with cogent reasons and factual arguments, often Quoting The Holy Qur’an And The Ahadees.
Prophet Muhammad (peace be upon him)

With regard to Prophet Muhammad (peace be upon him), Annie Besant points out that there is no intermixture in his history of the mythic element. His life was led in the glare of history in the seventh century of the Christian era. To quote her: “How utterly ignorant are they who attack the Prophet Muhammad, is shown by history. Many do not know the history of his life – so simple, so heroic and so noble in its outlines; one of the great lives of historic men.” Later she says: “And how simple and frugal his life! He mended his broken shoes, patched his own coat – tailor and cobbler for himself, even when, towards the close of his life, thousands around him bowed down to him as Prophet.” She adds: “Where you have these two qualities in one character – the love of children and a character that makes the men around him call him the Trustworthy (Al Ameen) you have the elements of a hero, of a born Leader, of a Teacher of men.”

“The ink of the scholar is more precious than the blood of the martyr.”

She says: “This sentence should be emblazoned in letters of gold on the wall of every school established by Musalman’s, for the children of Islam have ever rushed joyously to martyrdom, but in late centuries – things are rapidly changing now – they have honoured scholars but little.

She also mentions the great strides made by Muslim scientists in subsequent years which greatly influenced the West and triggered scientific advancement in the world.

Status of Women and Polygamy
Annie Besant dismisses the arguments that Islam discriminates against women and states that in Islam, men and women are put on a perfectly equal footing in matters of religion. Regarding polygamy, she observes that when Islam was revealed, people were living in promiscuity and had no sex morality. Only gradual reform was possible and therefore man was allowed to have four wives but on the condition that a husband might only take a second wife if he could treat her in all respects as the first. She points out that the true and right sex relation between one man and one woman is preached as an ideal in some countries, but is gender practiced in none. To quote from the book: “There is pretended monogamy in the West, but there is really polygamy without responsibility; the “mistress” is cast off when the man is weary of her and sinks gradually to be the “woman of the streets”, for the first lover has no responsibility for her future, and she is a hundred times worse off than the sheltered wife and mother in the polygamous home. When we see the thousands of miserable women who crowd the streets of western towns during the night, we must surely feel that it does not mouth to reproach Islam for its polygamy. It is better for a woman, happier for a woman, more for a woman, to live in Muslim polygamy, united to one man only, with the legitimate child in her arms, and surrounded with respect, than to be seduced, cast out into the streets – perhaps with an illegitimate child outside the pale of law – unsheltered and uncared for, to become the victim of any passer-by, night after night, rendered incapable of motherhood, despised of all”.

Islam and the Sword
Another common diatribe against Islam is that it is a persecuting faith, a religion of the sword. Annie Besant clarifies that the injunction “Slay the infidels” is only for those who attack you. She says: “Nor should it be forgotten that some of the exhortations, now interpreted as universal, were really addressed by the Prophet, as a general, to troops just going into battle, often against overwhelming odds, and were intended to rouse them to courage in the impending fight.

His practice may be taken, surely, as a commentary on his precepts; and we find that he stopped the universal practice of killing prisoners taken in battle and taught his soldiers to treat their captured foes with the utmost kindness.

Need for Interfaith Harmony
Her concluding remarks are very much pertinent to the present times: “And that purpose is the drawing together of Musalman’s and Hindus, for India can never become a nation until Hindus, Zoroastrians, Christians and Musalman’s understand each other. Shall we not all put aside theological hatreds and feel alikebrothers? Shall we not learn to respect each other’s faith, and reverence each other’s worship? Each should not only love his faith but also live it, and realize that his neighbour’s faith is as precious to his neighbour as his own is precious to himself”.