Assembly Elections 2016 – No Cakewalk for Trinamool 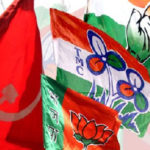 The West Bengal election scene has suddenly captured everyone’s imagination. It’s no longer a cakewalk for the Mamata Banerjee’s (Didi) Trinamool Congress Party (TMC). She has been rattled by her two implacable foes”the Congress Party and the Communist Party of India (Marxist)”coming together to challenge her rule.
It was she and her party who had ousted the longest serving elected Marxist government anywhere in the world in the 2011 Assembly elections. Few people now remember that the TMC was in alliance with the Congress then under the UPA. Having won a landslide against the Leftists, she had ditched the Congress and refused to take them on-board in Government. The same Congress has banded with CPM now, to see her exit from the Writer’s Building. Such somersaults were neither expected from the Congress, nor were they characteristic of the grand old Party that ruled India almost interruptedly for the first 45 years.

Surprises from Mahajod
Surprises, if any, would mainly owe themselves to the Congress+Left alliance (Mahajod in Bengali). The Left front has given 95 seats for the Congress to contest whose main pocketborough is in the three districts in the northern parts of the state. BJP which had secured nearly 16% of votes in the 2014 General Elections may emerge highly dented after the elections as most people see a more viable alternative in Mahajod to the TMC. It is now surmised that if the Congress and the Left had brokered the alliance a bit earlier, the TMC may have been in much worse condition and would have been fighting to retain every single of its votes.
What is observable is that five-year Didi’s rule has not made much of a difference in West Bengal. Infrastructure remains pathetic, the flyover collapse in the heart of Kolkata having left a huge blot of corruption and incompetence on the Government. However, Mamata still retains considerable goodwill among the rural masses who are willing to give her one more tenure to rule as they see some improvement in bijli, paani and sadak (power, water and road) situation. Even the bicycles distributed among the girls have enabled it to retain some sympathy.

Frustrated Youth
It is among the educated youth that the TMC’s influence stands eroded. Appointment of teachers has remained suspended for all these years. Lakhs of youth who had registered for recruitment test, have been hoping against hope to appear for exams. But the Government has sat over the files while the earlier Leftist Government had been holding the tests on the dot. Of course, the recruitment for ‘Civic Police’ volunteers (initially on daily wages, later on a monthly salary of Rs. 2,800 and still later Rs. 5,500) has benefitted a few sections. But by and large the State has seen no growth in jobs. Vast number of youth who had enrolled for teachers’ appointment are risking age bar in the endless wait for exams.

Hinging Hopes on Muslims
Mamata is largely hinging her hopes on solidarity of Muslim votes who constitute over 27% of the population. The 37-year rule of the Left Front had caused deep frustration among the Muslims to whom no benefit accrued in terms of education and employment. At the fag end of their tenure, they indeed made provision of 10% of reservation for the community. But unwillingness to do so was more than evident. Mamata’s government made some headway in implementing the same. Yet there being no mass recruitments, it has largely remained on paper. She however handed out some lollipops by giving salaries to the imams and muezzins of the mosques. The move was opposed by the Muslim intelligentsia, for it caused conflicts between the mosque managements and the personnel, often leading to court battles. Some even question as to why a government in a secular country fund the salaries of priests.

Milli Al-Ameen College Case
What is apparent from all these is that TMC too is interested in wooing religion based loyalties, but not genuinely interested in empowerment of the community through education and employment. The case of the minority status of the Milli Al-Ameen Girls College in Kolkata is one pointer. The College was established by the community in central Kolkata in 1992 by collecting all kinds of charities. The previous Left Front government continued to deny it the minority status till 2008 when it was forced to acquiesce on a fiat by the National Commission for Minority Educational Institutions (NCMEI). The State Government approved the same in 2009. A Governing body was constituted in 2009. The minority status was reconfirmed in 2014. But the Government cancelled the same by a letter on January 20, 2015. It was in response to an internal conflict within the staff members who had approached the Government to declare the ‘minority status’ null and void.

Stingy Attitude
Even a court verdict confirmed the cancellation of the ‘minority status’ on April 1, 2016, even as the campaigning had begun for the Assembly elections. The stingy attitude in recognising such positive efforts to improve educational status of the community proves that Mamata Government is no different from the previous Left Front government which tried all the tricks in its bag to keep the Muslims uneducated. No wonder then that the latest SNAP report on Muslims titled Living Reality of Muslims of Bengal released by Nobel Laureate Amartya Sen depicts a gloomy picture of the community. (The report was carried by Islamic Voice in March 2016 issue vide “Muslims of West Bengal Live in Abject Poverty”). Sen had accused the West Bengal governments of deliberately neglecting the community’s development.

Creating Rifts
But Mamata is trying to sow confusion by driving a wedge within the community through a variety of stratagems. She won Siddiquallah, the secretary of the AIUDF in West Bengal (The party headed by Badruddin Ajmal with its base in Assam) to her side and has given him a ticket from Mangalkot seat. Siddiquallah was a member of the Jamiatul Ulema Hind. She was similarly successful in bringing Abdur Razzak Molla, a former Marxist MLA for several terms (and a minister who could save his seat in 2011 Assembly elections) into the TMC. He has now been given a ticket from Bhangar constituency by Didi.
These stratagems have not been liked by the Muslim community and are likely to cut into TMC influence to some extent. However, largely the community still seems to be smitten with TMC affection. Educated sections among Muslims”small though”aspire a paribortan (change). Their voice and influence has limited impact.
In the overall scenario, the BJP seems to be losing ground considerably. The Party could win two Lok Sabha seats in 2014 and had lead over all other candidates in 14 Assembly segments. It is likely to lose much of them. However, it may win a couple of seats in Kolkata where collapse of the Flyover in Central Kolkata has given it opportunity to draw mileage.