Congress Gears up for Assembly Polls

The Congress party in Karnataka has so far held two minority conventions to consolidate its hold over the sizeable minority votes. 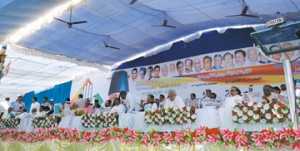 Bangalore: The Congress party in Karnataka has geared up to garner maximum votes of the minorities who constitute a little over 18 per cent in the state. The party is convinced that minorities are the most solid social component after Lingayats whose votes will be decisive in the coming Assembly elections.
The party has organized two minority conventions, in Tumkur and Belgaum, to provide an open forum to the Muslims, Christians and Jains to voice their grievances as well as aspirations. The exercise is seen as the Party’s move to steal an advantage over the ruling BJP which is licking its wounds after exit of its strongman and former chief minister Mr. Yeddyurappa. As of now the ruling party’s votebank shows major schisms with Yeddyurappa threatening to make a considerable dent into it.
The man behind the move to consolidate the Minority votes is Mr. Naseer Ahmed, an MLC who is keen to bring all and sundry leaders and activists on a single platform. The massively attended conventions have demonstrated in ample measure that a cross section of people belonging to two principal communities, Muslims and Christians, including social activists, teachers, businessmen, professionals, youth and women attended and interacted with the leaders rather than bringing hired crowds. Actively coordinating with him from northern part of the state is Feroze Nooruddin Sait, the MLA from Belgaum.
Naseer says the minorities have put up a demand for tickets for 30 seats. The highest number so far given had been 17 and the party does not seem to be in a mood to concede more than 18 this time, lest the rival BJP draw some propaganda mileage.
The conventions were addressed by all Congress bigwigs including the Opposition leader Siddramaiah, KPCC President Mr. Parmeshwar, Minority Affairs Minister Mr. K. Rahman Khan, besides MLAs such as Roshan Baig, N. A. Harris, former Union Minister Jaffer Sharief, and C. M. Ibrahim.
Favourable noises were made to woo the minorities. Siddramaiah went to the extent of telling that a legislation may be brought to make necessary amendment in the Constitution to ensure that Minorities were given fair share in the administration and within political parties. Mr. Rahman Khan wanted implementation of the recommendations of the Sachar Committee and Justice Ranganath Mishra Commission. One of the resolution highlighted the fact that the minorities representation in the Legislative Assembly and the Council had dipped to only 4% in the State while the situation in the third tier civic bodies was still lower.
The two conventions called for stopping the harassment campaign against Muslim youth across the country. They also urged constitution of separate standing committee for Minorities in the Karnataka Assembly. It also demanded that the Kannada Proficiency Test under the KPSC competitive exams should be made easier and simpler and making it tough and cumbersome amounted to discrimination of non-Kannada speaking people. It criticized the current policy of insisting on 75% minority community students on the rolls for recognition as minority institutions and called for withdrawal of such definitions. It also demanded that all those innocent people who were incarcerated under terror laws and were later acquitted by the courts be compensated financially.