Hajj 2013 will be here in a few months, and Chairman of the Karnataka State Hajj Committee,
M.M. Ahmed, is all set to offer the best facilities to the pilgrims, one of them being the new Hajj Ghar.
By A Staff Writer

The Hajj pilgrimage is a journey of a lifetime and pilgrims will never forget their experiences during their journey and the complete picture remains ingrained in their memory forever. Making arrangements for the authorities in charge of the pilgrimage affairs, is not an easy task. While some choose the private Hajj operators in India, others may opt to travel through the Hajj Committees of their States.
The Karnataka State Hajj Committee is getting all set, making preparations for Hajj 2013. Chairman of the Karnataka State Hajj Committee, M.M. Ahmed who was unanimously elected in August 2012, as chairman, spoke to Islamic Voice on issues related to Hajj and his own efforts to make the procedure of the journey trouble-free for the pilgrims.
Modest and soft-spoken, M.M. Ahmed has been working at the grass-root level since the time he opted to do few diplomas. “ I did not go to universities for any higher studies as I thought I would make my career in the Gulf,” he says.
He began working in the Steel market in Bangalore, running his own business, Danish Steels. Through sheer hard work, he won the dealership of Steel Authority of India and he dropped his plans to work in the Gulf.
Ahmed used to always associate himself with social work and gained reputation as hard-working and sincere over the years. “ I owe so much to my parents as they imbibed the values of honesty in me,” says Ahmed.
As chairman of the Hajj Committee, his work constitutes 24 hours, seven days a week, especially during the Hajj season. “ In 2012, over 7000 pilgrims from Karnataka performed the Hajj through the Committee, embarking from Bangalore, Mangalore, Goa and Hyderabad, flying direct to Jeddah in Saudi Airlines and Air India,” he says. Throwing light on the Hajj Camp set up in Bangalore prior to the departure, Ahmed says that without the help of the volunteers, the Hajj Camp would just not have been such a huge success.
The pilgrims who arrive at the Hajj Camp are provided all meals free of charge, all facilities from wash rooms, drinking water to medical care, is also taken care of very carefully.
Giving hundred percent credit to the volunteer organizations and individuals too, who have offered their services without charging a single rupee during Hajj Camp, Ahmed says that the Shamiana for the Camp has been provided by Amanullah and Sons for over more than 16 years. Even the AC Volvo buses which transport the pilgrims to the airport from the Camp has been organized by National Travels, again without any price tag.
“ But I am not at all happy with the quality of service of the Khadims who are appointed by the Hajj Committee of India who are sent here to travel with the pilgrims. They do not give us any feedback and moreover, they do not take charge of the pilgrims, half the time they are doing their own thing and not worried about the fact that they should take care of the pilgrims. Once they reach Jeddah and the cities of Makkah and Madinah, pilgrims lose touch with the Khadims who are supposed to take care of the needs of the pilgrims,” says Ahmed.
Despite some ups and downs, Ahmed says that the Hajj Committee is always at the service of the pilgrims and many memorable moments that occur during the Hajj season are unforgettable.
“From going to the airport to see off the pilgrims and then again to receive them back in India after the Hajj are emotional moments”, he says.
In a few months time, Hajj 2013 will be here and Ahmed says that the Hajj Ghar in Hegdenagar in Bangalore is getting ready. Being built at a cost of Rs 45 crores, the Hajj Ghar can accommodate over 700 pilgrims. “ We will get another 4 crores from the Central Hajj Committee for this purpose,” he confirms.
Hoping that in 2013, the number of pilgrims from Karnataka will be around 10, 000, Ahmed is of the view that such a big task as making arrangements for the pilgrims is indeed team work and he generously is all praise for all those who work to make it a success during the Hajj season. 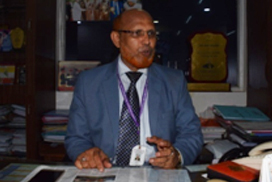