Fasting: Its Nature and Purpose

Islamic Voice 0 June, 2015 12:00 am
Superiority of Moral Standards
Facing the Day of Decision
Quran: A Book Full of Wisdom

Believers, fasting is decreed for you as it was decreed for those before you, so that you may remain God-fearing, (Fast) a certain number of-days. But whoever of you is ill, or on a journey, shall fast instead the same number of days later on. Those who find fasting a strife too hard to bear may compensate for it by the feeding of a needy person. He who does good of his own account does himself good thereby; for to fast is to do yourselves good, if you but know it.
(The Cow, “Al-Baqarah” :2;183-4) 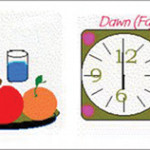