Islamic Voice 0 September, 2016 12:00 am
Division in religion
The Quran is Sublime and Full of Wisdom
Affluence and People’s Behavior 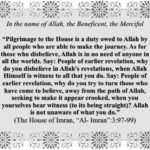 Pilgrimage is an assembly of great significance. It has its historical associations which centre around the noble concept of faith which highlights the link between man and his Creator.
Pilgrimage to the House is a duty owed to Allah by all people who are able to make the journey. As for those who disbelieve, Allah is in no need of anyone in all the worlds.
One thing which attracts our attention when we read this verse is the fact that the duty of pilgrimage is made in absolutely general terms: A duty owed to Allah by all people. may also infer from the way this verse is phrased that mankind is required to accept this faith, fulfill its duties, offer its worship and make the journey of pilgrimage to the House to which the believers in Allah turn.
Pilgrimage is a personal obligation on every individual once in a lifetime, and it becomes due when the condition of ability are fulfilled, including physical health, ability to travel and safe passage. There is difference of opinion among scholars with regard to the time when this duty was imposed. Relying on the report that this passage was revealed in the 9th year of the Prophet’s (Pbuh) settlement in Madinah, which is generally known in history books as “the year of delegations”, some scholars believe that pilgrimage was made an obligatory duty in that year. They support their argument with the fact that the Prophet himself went on his pilgrimage later. The point, that the timing of the Prophet’s pilgrimage may not be taken as an argument in support of the view that pilgrimage was made obligatory at a late stage in the life of the Prophet. Several considerations might have contributed to that delay. One of these may have been the fact that the polytheists use to make their walk (Tawaf) round the Ka’bah completely in the nude, and they continued to do so after the liberation of Makkah.

Pilgrimage: An Assembly of Great Significance
The Prophet did not like to join them in their tawaf. The Surah entitled “Repentance,” or At-Tawbah, was revealed in the 9th year of the Islamic calendar, and polytheists were banned from tawaf in the Ka’bah altogether. The Prophet offered his pilgrimage in the following year. Hence, the duty of offering pilgrimage may have been legislated earlier, and this verse may have been revealed in the early part of the Prophet’s settlement in Madinah, probably around the time of the battle of Uhud which took place in the third year of the Islamic calendar.
This clear statement imposes this obligation of pilgrimage, in the terms of a right which Allah demands from all people who are able to make the journey. Pilgrimage is the Muslims’ annual general assembly which is held at the House from which their message was given to them at the first time, and which witnessed the birth of the pure faith of Abraham, and which was the first House Allah set up on earth for His own worship. Pilgrimage is, therefore, an assembly of great significance. It has its historical associations which centre around the noble concept of faith which highlights the link between man and his Creator. Faith means man’s spiritual response to Allah, a fact of great significance considering that only with a blow of Allah’s spirit, man has acquired his humanity. It is a worthy concept as a basis for human unity. Hence, it is appropriate that people should assemble every year at the Sacred Place which witnessed the birth of this call to mankind, to unite on pure faith.
Having provided this clarification, the surah instructs the Prophet to address the people of earlier revelation denouncing their attitude towards the truth of this message. They know this truth fully well, yet they try to turn people away from it. They disbelieve in Allah’s revelations although they bear witness to them and they are certain that these revelations are true: Say: People of earlier revelation, why do you disbelieve in Allah’s revelations, when Allah Himself is witness to all that you do. Say: People of earlier revelation, why do you try to turn those who have come to believe away from the path of Allah, seeking to make it appear crooked, when you yourselves bear witness (to its being straight)? Allah is not unaware of what you do. The essence of divine faith is the same. Anyone who knows it, is certain to know that whatever is preached by subsequent messengers is true. He is bound to accept their call to surrender himself to Allah in the way they teach. This fact should shake those people and make them fear the consequences of insisting on their erring ways.

Aware of the Truth
Those people who adhere to a divine book can no longer be so deceived as they listen to Allah’s words declaring the truth about those people branding them as total disbelievers: Allah Himself is witness to all that you do. Allah is not unaware of what you do. Moreover, Allah makes it clear that they are aware of the truth which they deny and away from which they try to turn people: You yourselves bear witness to its being straight. It is absolutely clear, then, that they were aware of the truth of what they rejected. They knowingly tried to turn people away from what they realised to be a straight path. What a wicked attitude. Anyone who adopts it is not worthy of trust. He is indeed worthy of nothing but contempt and denunciation.
We need to reflect on Allah’s description of those people in the following terms: Why do you try to turn those who have come to believe away from the path of Allah, seeking to make it appear crooked.
This is a statement of great significance. Allah’s path is straight, and every other way is crooked. When people are turned away from Allah’s path and believers are forcibly barred from following Allah’s constitutions, nothing remains straight. Our standards become faulty and nothing remains on earth except crookedness which can never be set straight.
Corruption thus wins the upper hand. Human nature becomes corrupt as it deviates from the straight path, and life becomes corrupt as it follows a crooked line. All this corruption is the result of turning people away from the path of Allah which generates erroneous concepts, deviant conscience, crooked morality, wicked behaviour, unfair transactions and injustice in all relations within human society and between man and the universe around him. Either people follow the path of Allah which is straight and leads to everything that is good, or they deviate from it in any direction, and this will inevitably lead to crookedness, evil and corruption. In man’s life, there is no third alternative.