Islamic Voice 0 February, 2018 12:00 am
Hold On To The Truth
Essence of Worship
Facing the Day of Decision 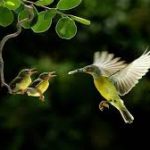 In the Name of God, the Merciful, the Beneficent

As for the unbelievers, their deeds are like a mirage in the desert, which the thirsty traveller supposes to be water, but when he comes near to it, he finds that it is nothing. But he finds that God (has always been present) with him, and that He will pay him his account in full; for God is swift in reckoning. Or else, like the depths of darkness in a vast deep ocean, made yet more dark by wave billowing over wave, with clouds above it all: Depths of darkness, layer upon layer, (so that) when one holds up his hand, he can hardly see it. Indeed the man from whom God withholds light shall find no light at all. Are you not aware that it is God whose limitless glory all creatures that are in the heavens and earth extol, even the birds as they spread out their wings? Each of them knows how to pray to Him and to glorify Him; and God has full knowledge of all that they do. To God belongs the dominion over the heavens and the earth, and to God shall all return.
(Light, Al-Noor: 24: 39-42)

The first two verses in this passage paint two scenes that are full of life, describing the situation the unbelievers find themselves in. In the first scene, is the surprise faced by the unbelievers when God gives them their account. It is a much greater surprise than that of a desert traveller being deluded by mirage and finding it to be nothing.
In the second scene, layers of darkness gather on top of each other, to contrast with the false brightness of the mirage. The great fear is transmitted by the bottomless ocean engulfed in darkness, and waves upon waves moving in a never-ending motion. Above all those, dark clouds gather. Thus, layers of darkness amass, to the extent that if a person holds out his hand, he fails to see it in the engulfing darkness that spreads an air of fear and panic.

Darkness Isolated from the Divine Light
This is all a description of unbelief, which is shown as darkness totally isolated from the divine light that radiates throughout the universe, a deep error that prevents people from seeing even the nearest signs of guidance, a fear that leaves no trace of security. For, “indeed the man from whom God withholds light shall find no light at all.” God’s light is guidance planted in people’s hearts, giving them an informed insight, and a bond between human nature and the laws that operate in the universe at large. It is the only true enlightenment. A person who is cut off from this light remains in darkness that cannot be removed, in fear with no security, in error without return. At the end he finds all his actions to be a mirage leading him to ruin. No action is valid unless based on faith, no guidance without faith, and no light unless it is God’s light.

Glorification Echoed Everywhere
This is the scene of unbelief, error and darkness in human life. The scene of faith, guidance and light in the great universe follows it. It is a scene showing the entire universe with all that live in it, human and jinn, planets and stars, and all beings, whether animate or inanimate, sharing in God’s glorification. We feel how awesome the scene is as we hear the glorification echoed everywhere in the heavens and the earth: “Are you not aware that it is God whose limitless glory all creatures that are in the heavens and earth extol, even the birds as they spread out their wings? Each of them knows how to pray to Him and to glorify Him; and God has full knowledge of all that they do.”
Man does not live alone in this universe. All around him, to his right and to his left, above him and underneath him, and in the expanse beyond, whether reached by his imagination or not, there are beings God has created with different natures, forms and shapes. All of them share in their belief in God, turn to Him and extol His praises. He “has full knowledge of all that they do.”

Scene of Birds
The Qur’an directs man to look around him: All is of God’s making and all living things everywhere in the heavens and earth are His creatures, glorifying Him and singing His praises. The Qur’an also directs our full attention to something we see every day without stirring any feeling in us because of its familiarity: It is the scene of birds lifting up their legs and spreading out their wings as they fly. They also glorify God. “Each of them knows how to pray to Him and to glorify Him.” Only man neglects to glorify his Lord when he is the one who should be most aware of the importance of believing in God and glorifying Him.
In this scene, the whole universe appears full of humility as it turns to its Creator, singing His praises, addressing its prayers to Him. This it does by nature. Its obedience to God is represented in its laws, which operate, by God’s will. When man refines his senses, he sees this scene as reality, as though he hears the rhythm of God’s glorification echoed throughout the universe. He shares with all creatures their prayers and appeals to God. Such was Muhammad, God’s messenger, (peace be upon him). When he walked, he heard the gravel under his feet singing God’s praises. Such was David: When he chanted his Psalms, the mountains and the birds chanted with him.
“To God belongs the dominion over the heavens and the earth, and to God shall all return.” No one should turn anywhere other than to Him, and no refuge is to be sought except with Him. Meeting Him is inevitable. His punishment, if deserved, cannot be averted except through His grace. To Him all shall return.