The Best Night of the Year

Islamic Voice 0 August, 2013 12:00 am
Al-Quran Mission
On the Rights of Parents in Islam
Hold On To The Truth

In the Name of God, the Beneficent, the Merciful 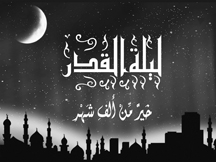 The Qur’an says that it is better than a thousand months, and that it is perfect peace. It occurs once a year, but it is certain to take place. Therefore it is an occasion that must not be missed. What night are we talking about? It is the Night of Power for which a short surah is devoted in the Qur’an: “From on high have We bestowed it (i.e. the Qur’an) on the Night of Power. Would that you knew what the Night of Power is! The Night of Power is better than a thousand months. On that night the angels and the Spirit by their Lord’s leave descend with all His decrees. That night is peace, till the break of dawn.” (97: 1-5)
It is not possible to determine whether it is the start of the revelation of the Qur’an on this night that gives it its distinction, or that it is originally a blessed night chosen by God for the start of bestowing the Qur’an. Whichever is the case, the night is one of blessings defined by God in such great terms.
The Prophet (Pbuh) who has taught us all good things has shown us the way to make the best benefit of this night and to ensure that we receive its blessings. He has indicated that spending the night, or most of it, in worship ensures the forgiveness of all of one’s past sins. One may alternate between different types of worship: prayer, reciting the Qur’an, glorification of God and supplication. It extends from the time when the obligatory prayer of Isha has been offered to the time when Fajr prayer is due at dawn. What is important is the sincerity that must be characteristic of one’s action. It should be in complete devotion to God and seeking His acceptance.
Which night is it? The Prophet tells us that it is one of the last ten nights of the month of Ramadan. Certain hadiths narrow that to the odd nights in the last third of the month. Yet the Prophet’s own action shows that he was extra vigilant of his worship in all ten nights of the last third of Ramadan.
Aishah reports: “When it was the (last) third of the month of Ramadan, the Prophet used to strengthen his resolve, spend the nights in worship and wake up his household.” (Related by Al-Bukhari).
The Prophet’s action clearly indicates that if one does the same, one will not miss out on the Night of Power. The fact that the Prophet kept the night uncertain was not his choice. He was informed of the exact night, and he went to address the people and tell them about it, but it was blurred for him. He no longer remembered its exact timing. Therefore, he indicated that it is one of the last third of Ramadan. This is more beneficial to us, because seeking it over ten nights means that we are more devoted and our worship is extended. This is bound to make our reward even greater.
What is important to remember about the Night of Power is that it is the night when the Qur’an was revealed. That was a great event, because it meant that God chose to show man the way to his happiness in this present life and the life to come, providing him with a constitution to implement. This is a way of life that suits all communities, in all generations. It is a great act of divine grace. We feel its benefit in the fact that our life is set on a different course from the rest of mankind. It is a course of purity, sincerity, truth and devotion. It is a course that incorporates every virtue known to man and shuns every evil. It is a course that brings out the best in man, preparing him for a life of pure happiness in the hereafter. We must never lose sight of our duty to bring our life in line with the Qur’an. When we seek to mark the Night of Power, we acknowledge God’s blessing in revealing the Qur’an to Prophet Muhammad, the teacher of pure goodness.