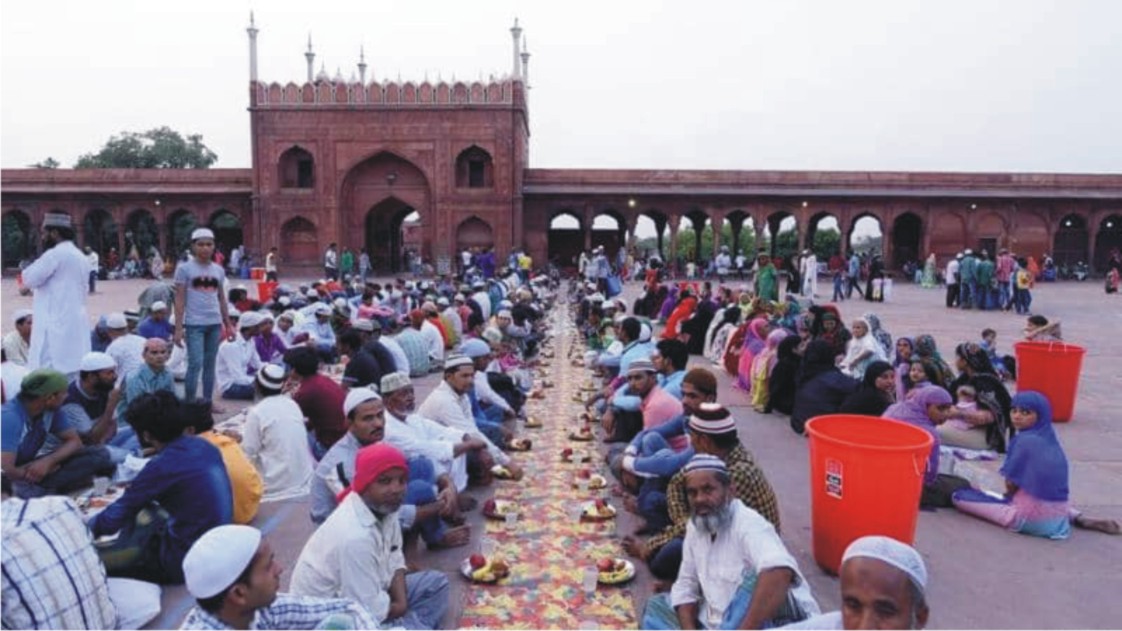 The holy month of Ramzan is here again, and we are truly blessed. Ramzan elevates our thoughts and actions to a higher spiritual level. The highlight of Ramzan is fasting. The Islamic type of fasting is unique because the person who fasts will not eat or drink anything from dawn to dusk. Men and women who fast resist the pangs of hunger and do not mind being parched with thirst. Having resisted these biological needs with utmost piety and patience the whole day, a little forbearance is also necessary at the time of Iftar.

Iftar In Mosque
When the time to break the fast comes, a big dastarkhan is laid out in most of the mosques with fruits, samosas, and sherbets placed neatly for the rozdars. The maghrib prayer is conveniently postponed by a few minutes to give enough time to partake in the stuff. Providing eatables to a person to break his fast is indeed a noble act. Fine. But nobody thinks about the womenfolk left out in this all-male arrangement. On the contrary, if the snacks and food were sent to the houses of the poor, the women and children too could enjoy the same.

The tradition of sending eatables to the mosque appears to have been started to feed the traveller and the poor. This indeed is a noble and virtuous action. But I fail to understand why people who reside in the houses near the mosque have to partake in the Iftar in the mosque instead of having it at home with their family. I break the fast with a date at home, drink a little juice or water, and proceed to the mosque to offer Maghrib prayers. After the namaz, I return home and then eat the goodies thanking Allah for the same.

Since evening, the roads leading to the mosques have been bursting with activity, with vendors selling fruits, samosas, faloodas, haleem, and many other eatables. Many of us spend the time between asar and maghrib in collecting the eatables. Of late, food Melas are being arranged near some mosques, with a variety of foods being sold to swarming crowds. These food Melas continue even after taraveh prayers and have become family outings. Unfortunately, all these practices project Ramzan not as a ‘fasting’ month but as a ‘feasting’ month.

Iftar parties hosted by Ministers and political leaders are more grandiose. Although considerably reduced in recent times, Iftar parties by politicians are still in vogue. Though I avoided such Iftar parties during my government service, sometimes we had to attend them inevitably due to official obligations. In one such Iftar party arranged by our department’s Minister, there was such a massive crowd that I preferred to rush back home and have a quiet dinner in the peace and tranquillity of my house. Iftar time is best utilized to seek bounties from Allah with prayers and supplications and not be lost in crowds.

Relatives and friends also arrange iftar get-togethers. Lavish banquets offering a variety of delicacies and the party atmosphere created when families get together can at times cause a delay in reaching the mosque for taraveh prayers. The sumptuous dinner can even make the prayers a bit difficult. These iftar get-togethers burden the house’s women with cooking, the arrangements, and cleaning, thereby robbing their valuable time which they could have gainfully employed in prayers. 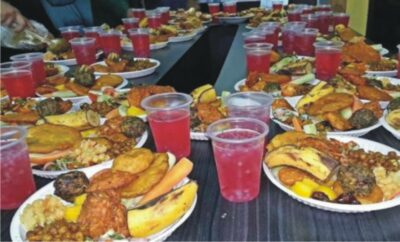 Lailatul Qadr
When the sacred night of lailatul qadr arrives, the food stalls around the mosques are kept open late, catering to the faithful, some of whom pursue special dishes rather than focus on zikr and prayers of the holy night. Some boys will be on the streets speeding and doing wheeling on their two-wheelers. We often hear about many accidents and deaths happening. Parents should be strict and should not allow their boys to ride their two-wheelers.

The normal practice in our part of the country is that the recitation of the Qur’an in taraveh is completed on the 27th night of Ramzan. This is a common practice followed for many years since earlier the huffaz used to come from different States and had to get back to their native places before Eid. Now since the local huffaz are leading the taraveh prayers in many mosques, the completion of the recitation of the Qur’an in taraveh prayers (commonly called Qatmul Qur’an, which is a misnomer) could be extended by two more days. A few rare mosques do complete the Qur’an on the 29th. But in all the other mosques, the 28th and 29th taraveh prayers have a subdued aura since the taraveh namaz is done with short verses from the Qur’an on these nights.

Eid-Ul-Fitr
Once the Lailat’ul Qadr of the 27th night of Ramzan is over, men and women throng to the markets for Eid purchases. In the previous two years, this had become a low-key affair due to Covid restrictions, but now with normalcy returning, we can expect that old habits will die hard! A day before the Eid, women rushes to the commercial places where ladies applying mehendi make a fast buck. Of late, even boys are doing this job, and many ladies have no qualms about getting the Mehendi (Hina) applied from them. Lastly, coming to the Eid prayers, more and more people are now offering Eid prayers in mosques, a facility provided for older adults. If this trend continues, Eidgahs will become redundant. The Eidgahs have even lesser attendance for Eid-uz-zaha (Bakrid) prayers. The common excuse given is that the butcher or Qassab (the most important person on this day) has to be arranged at the earliest for the animal sacrifice. While women too offer Eid namaz in many countries, in India, generally speaking, only the men attend the Eid prayer congregation.

Going back to the topic of iftars, during this hallowed month of Ramzan, let us eat to live and not live to eat.