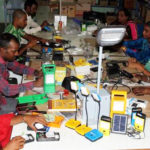 The Divyangan Solar Society in Hyderabad led by Zubeda Begum has so far sold 20,000 solar lights.
Sashikanth, who was affected by polio in childhood, never thought he could earn his living. But life has changed for better since the past three months, thanks to Divyangan Solar Society (DSS).
Led by Zubeda Begum, a differently-abled woman fighting for the rights of divyangans (or differently-abled people), the DSS has employed Sashikanth along with 14 others who are differently-abled to sell solar-powered lights. It has also given indirect employment to a total of 85 persons. So far, the Society has sold over 20,000 solar lights of different varieties.
Work begins at 9.30 a.m. and workers get Rs.3,000 a month as salary. For many, more than the money they get by working here, it’s the respect that they earn by doing so that matters the most. “Everyone considers a differently-abled person a burden both on the family as well as the society. We don’t get jobs easily as the employers see certain limitations in what we can do and refuse to give us a chance to prove them wrong. It’s humiliating. That’s the reason why I began my fight for divyangans and their rights. I can say I have been partly successful in this regard,” Zubeda says.
About two decades ago, she set up a public telephone booth, which took her almost a year, for self-sustenance. Given her grit to live life on her own terms, she was entrusted with the responsibility of running DSS after it was established in 2016. For the past two years, the Society has done business of Rs. 18 lakh. It produces 10 varieties of solar lights. The DSS has also established its units in Mahabubnagar, Janagam, Manchiryal and Kamareddy.
(Taken from thehindu.com)