Islamic Voice 0 February, 2018 12:00 am
Muslims in Kolkata Find a Place to Call Home
Bangalore’s Lamp of Love
Artworks by Little Hands for a Cause! 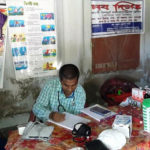 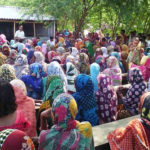 It is often found that the greatest of changes in our society starts off with just a thought. A good thought for a better society, especially by someone who is himself from the marginalized section of the society is always more effective than hundreds of conferences arranged in plush hotels.
Meet one such man, Dr Faruk Hossain Gazi, from North 24 Parganas’ Sandeshkhali locality, a doctor by profession posted as Government Medical Officer at Dubrajpur Rural Hospital in West Bengal’s Birbhum district. Coming from a very poor family and having faced hardships throughout his academic life, his own life taught him the need for education and concern for health, which whetted his zeal for the establishment of an organisation, Naba Diganta, for the welfare of marginalised people of the society.
Dr Gazi, the founder and the General Secretary of Naba Diganta, initiated this establishment by spending Rs 4.5 lakh from his own pocket. Naba Diganta works with the tagline ‘Helping the helpless’ and set out its journey with five members who are by profession doctors, organising free medical camps in the remote rural areas of Sandeshkhali locality. Nearly four years later, they have now a registered office at Dr Faruk’s village, Khas Sankdaha, and the number of volunteers are now more than 5,000. From five members, now the organisation has 100 active members who work in all the districts of Bengal. The volunteers of Naba Diganta include many personalities from many professions who are directly or indirectly helping Naba Diganta.

School for Orphans
While organizing medical camps in rural areas, they realized the need for education for poor children and established a free school, Naba Diganta Mission School, for orphans and poor children. Started with 40 students from class one to class four, the school now has 200 students whose all expenditures are taken care by the organisation.
Within three years since its establishment, Naba Diganta organized many medical camps and every week, more than 200 rural people are given free treatment. There are 40 volunteers, especially female graduates in Naba Diganta, who are trained in medical terms to check patients already checked by doctors on a daily basis and they work on a ‘Swasthyabroti Health Volunteers’ Project.

Reaching Out to Flood Victims
The team of Naba Diganta also reached out to the flood victims of Bengal that ransacked thousands of lives last year and the team organized medical camps in Malda, Medinipur, Howrah, Uttar Dinajpur districts and distributed free medicines and clothes among the distressed people.
Blankets are also distributed among the street beggars and footpath dwellers every year. The team also looks for orphans, poorest of the poor children to give them education and save them from being child labourers and early marriage of minor females.
Dr. Gazi says: ” I faced extreme poverty in my own life and the hardships that I had to bear with. So, from the very beginning of my life, I had a dream to stand by other children like me, in as many ways as possible. While staying at Al Ameen Mission, I got more inspiration from our Secretary, Nurul Islam through whom I came to know about the selfless activities of Ramakrishna Mission. Even my wife, who is a full-time social worker, inspired me a lot to execute that dream. Hence, the establishment of Naba Diganta took place”.
(For more details about Dr. Gazi and his work, please see the article about him by Mirza Mosaraf Hossain in twocircles.net)