Based in the US, IMRC (Indian Muslim Relief and Charities), has helped drinkable water accessible to drought-affected rural areas in India. 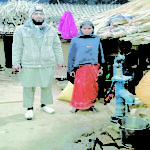 Marathwada, one of the five regions in Maharashtra, containing eight districts, is reeling under severe drought since last three years. It is the most water deprived region of Maharashtra. The rivers, canals, ponds and nallas have dried up. The poor population is forced to buy water at inflated prices from ‘water mafia’. The failing crops have forced farmers to attempt suicides. To bring relief to people in three drought affected districts of Marathwada, Nanded, Hingoli and Parbhani, IMRC (Indian Muslim Relief and Charities) based in the US, has installed 50 hand pumps since January 2016. Sunil Chaure, 42 from village Manatha in Nanded District, Marathwada, used to buy a bucket of water ranging from 2 to 5 rupees, which was eating up one third of his monthly income, but he is now relieved after IMRC built a hand pump in his village. Younus Ahmed, IMRC volunteer, who is looking after the water project in Marathwada region, said, “I have never seen such a huge intensity of drought. People are struggling for drops of water. The government’s drilling machines usually digs up to 200 meter and they stop if they don’t find any water. But when we started drilling, we found that water was available at 500-700 feet deep in the earth and started drilling at such lengths.” IMRC has set up and installed more than 400 bore wells and hand pumps across six Indian states since 2013. Besides the drought affected regions, the bore wells and hand pumps have been installed in the rural areas suffering from neglect of their governments, having deficiency of rains, recurring droughts, having unsafe source of drinking water and where people had to walk miles to fetch water. “The local people where the water wells were installed have expressed joy and immense gratitude for having local access to potable water. People from all the faiths are benefitting from IMRC water projects,” said Wahid Nadvi, the IMRC volunteer looking after water projects in Bihar and Jharkhand.
(Extracted from caravandaily.com/portal/us-based-indian-muslim-organization-makes-drinkable-water-accessible-to-drought-affected-rural-areas/)