The Greatest Misery is Self-Pity 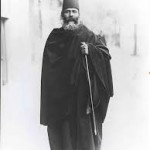