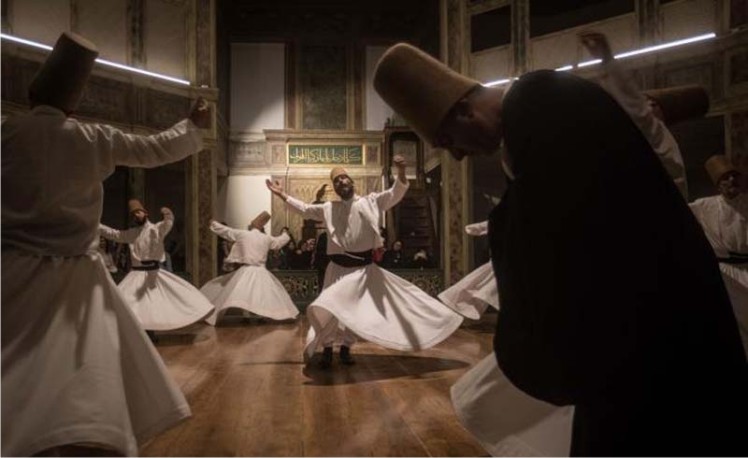 Remembering Rumi: How he inspired the East and the West

Listen to the reed how it tells a tale, complaining of separations–

“Ever since I was parted from the reed-bed, my lament has caused man and woman to moan. I want a bosom torn by severance that I may unfold the pain of love-desire.

Everyone who is left far from his source wishes back the time when he was united with it.”

With these words, Mevlana Jalaluddin Rumi begins his famous collection of “Masnavi” – one of the most important, influential, and widespread works of Sufi literature in the world. The masterpiece is interpreted as one of the world’s greatest poems, thanks to its depth of thought and inventiveness of images.

Why is it so important? Who is Rumi? What is the secret behind his significant influence on Western culture, apart from other great Sufis?

Rumi was born in the city of Balkh (currently in northern Afghanistan) on Sept. 30, 1207. His father is Baha al-Din Walad, a great jurist and mystic nicknamed the “Sultan of the Scholars.”

Rumi emigrated with his family from Balkh to Nishapur and then from there to Baghdad. The family spent many years moving between the cities of the Islamic world until it settled in the city of Qarman (central Turkey). Then the family migrated again to Konya, the capital of the Seljuk state, at the invitation of the Seljuk Sultan Aladdin Kayqubad I. And, on May 3, 1228, Rumi started a new life.

‘The meeting of the two seas’

It is impossible to discuss Rumi’s legacy and influence in the world without mentioning Shams Tabrizi – a dervish. Who was the reason for Rumi’s transformation from a jurist scholar to a mystic who knew God and whose followers have spread to all parts of the world over several centuries up through the present?

Tabrizi was born in Tabriz, and the exact date of his birth and death is not known. He is called “the pole of Sufism,” “the emperor of the madmen of love,” while the masters of Sufism call him “the bird.”

For Rumi, he was like the sun in whose absence the moonlight would never shine.

Just as Tabrizi’s meeting with Rumi greatly impacted his intellectual journey, their separation also had a greater impact on his literary production. Had it not been for the meeting, Rumi wouldn’t be the Rumi we know. Had it not been for the separation, Rumi would not have been burned by “the fire of longing that burned him” (fire is here a famous complex metaphor of Rumi), and he would not have written his poems that roamed the earth.

Although Rumi’s works are literary works of a Muslim jurist and mystic, written in the Persian language, they crossed the barriers of language, religion, and culture to reach different peoples belonging to different civilizations and cultures.

Although the first printing of Masnavi (the Persian version) was in Cairo in 1835, the West’s interest in studying the life and works of Rumi far exceeds the interest of the Islamic world. Many of those who translated Rumi’s works into Arabic even quoted them from the English and French translations made by some Orientalists.

Rumi had had a significant influence on Indo-Islamic culture since the 14th century, when Nizamuddin Auliya, the great guide of the Chishti order, wrote a commentary on Masnavi.

However, Rumi’s greatest influence on Indian culture in the modern era was the Islamic poet and philosopher Muhammad Iqbal (1877-1938), who considered Rumi his spiritual guide and “the prince of the caravan of love.”

It is worth mentioning one excerpt from Masnavi:

To demonstrate that the Masnavi is not only a book of mystical poetry and wisdom. But a complete approach to understanding religion, Ceylan says that “perhaps Rumi has meeting points with Greek philosophers or ancient Chinese culture, and perhaps his poems contain positions mentioned in the Bible and the Torah to convey an idea. But above all, he is a scholar and Muslim jurist, just as the Qur’an does not deny the Torah and the Bible.”

“Or whoever is a disciple of Rumi, he must first be a Muslim. Because the Mawlawi Order and the teachings of Rumi are not separate from Islam.”

Ceylan also says that Rumi is a good “brand” for introducing Islam and its teachings, presenting a correct image of Islam and correcting the stereotyped image in the minds of some that links Islam with violence and the rejection of the other, noting that the Masnavi has been translated into 26 languages and has continued to inspire many for more than 800 years.

We can conclude with a quote from one of the most famous and widely spread poems of Rumi, as it is a summary of the approach that a person should live by, regardless of his religion or race:

“In compassion and grace, be like the sun … In concealing other’s faults, be like the night…In generosity and helping others, be like a river … In anger and fury, be like dead … In modesty and humility, be like the earth … Either appear as you are, or be as you appear..”