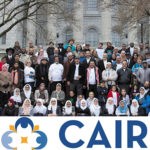 Missouri State: The Missouri chapter of the Council on American-Islamic Relations (CAIR-Missouri) and the Imam Council of Metropolitan St. Louis (ICMSTL), a body that represents 18 Islamic Centers in the Metropolitan area, condemned the vandalism targeting a historic Jewish cemetery in University City. The Imam Council will be encouraging Muslim congregations to donate money to help repair damages in the Jewish cemetery. In a statement, Imam Mufti Asif Umar said:”This is a horrific and disgusting act of vandalism which cannot be tolerated. We stand with our Jewish friends who have also faced numerous bomb threats against Jewish Community Centers across the Country. We hope the perpetrators of these crimes are swiftly caught and brought to justice.”
IMCSTL wrote a letter of solidarity to the various Jewish centers in St. Louis. This comes in the wake of the second round of bomb threats against Jewish community centers around the nation. “Our hearts and prayers go out to the Jewish Community,” said Imam Djilali Kacem head of the ICMSTL. “We are truly appalled at this act of vandalism in our city. We want the Jewish community to know that the Muslim community stands with you in solidarity as Anti-Semitism, Islamophobia and hate in general is on the rise in our nation.”