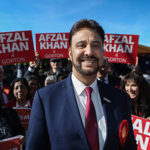 A British Muslim MP, Afzal Khan believes his election following the Manchester bombing sends a “powerful message” to those terrorists and bigots attempting to divide society. Born in Pakistan and brought up in the UK, Khan won the election on a Labour ticket and praised the people of his home city for responding with solidarity, compassion and the “determination” to defeat those who threaten their way of life. Suicide bomber Salman Abedi targeted Manchester Arena after a concert by US pop star Ariana Grande, killing 22 people and injuring dozens more. Addressing the House of Commons, Khan said: “In May, the city I love was the victim of a terrible attack – 22 adults and children were killed and over 100 people injured attending a concert at Manchester Arena”.
“It was an act of pure evil. Faced with this tragedy, the people of Manchester responded in the only way they know how – with solidarity, with compassion, and with the determination that those who seek to endanger our way of life will not succeed.”
The MP added that the attack in the arena led to an increase in hate crimes and termed the development unfortunate.
“Yet, just a few weeks later, the people of Manchester elected me, a Muslim.
“I cannot think of a more powerful message to the terrorists and bigots that their attempts to divide us will never succeed.”
Later in his speech, Khan said his journey to Parliament was “not the typical one”. Khan added that he was born in Pakistan and came to the UK when he was adopted out of poverty as a child. “Since then, Manchester has been my home for nearly 40 years. I often tell people while I was born in Pakistan, I was made in Manchester. “I left school with no qualifications and at 16 went straight to work as a labourer in a cotton mill. “Later, I became a bus driver and then a police officer,” the Labour MP said.
(Extracted from : www.geo.tv)