Just because Dr. Abdus Salam did not belong to the Sunni mainstream Islam in Pakistan, his contribution to the nation are denied, disowned and denigrated. 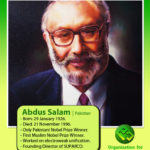 In the old quarters of Jhang town in Pakistani Punjab, a two-room house in a silent, narrow street has the status of a National Memorial. The 400-sq. ft. house is the ancestral home of Pakistan’s most known scientist Dr. Abdus Salam who was conferred the Nobel Prize for Physics in 1979 which he shared with two other scientists.
Just as other towns in this part of Pakistani Punjab, the locality harbours the distinct life and characteristics of the region. One can enter the locality from Bab e Muhammad and can see small shops lining the streets on two sides. Pedestrians share the constricted space of the streets with a variety of hawkers. There are umpteen confectionary shops that churn really out tasteful jilebis and amirtis that bear no match. The street has retained this aura since long, even before when small boy Abdus Salam, son of Chowdhury Mohammad Hussain, used to negotiate it to reach his school several decades ago.
Abdus Salam’s old house is part of a bunch of dilapidated structures which currently house immigrants from Indian side of Punjab. There is hardly anything that makes one house distinct from another. It seems, prior to Partition, Hindus lived here. But this particular house is partly one and half storied and is known for its intellectual accomplishments.

Fountainhead of Hate
I live in Lahore, around 150 kilometres from Jhang. But Jhang’s history is replete with tales of romantic heroes like Heer-Ranjha, Chandrabhan and Heera Singh who have enriched the Punjabi folklore for centuries and are part of Punjabi culture and literature. But I have found references to the city in contemporary history as one of cantonments, private militias and movements know for raising controversial slogans. It is rather poignant that the town has today got associated with hate, violence and terrorism. It was in 1980 when Haqnawaz Jhangvi, a moulvi from the town set up the militant body Anjuman e Sipah e Sahaba, a communal organisation. It was when Pakistan was under Martial Law imposed by Zia ul Haq and a jihad was launched against Soviet incursion into Afghanistan and the United States was leading the Jihad bandwagon from Pakistani soil.

Hotbeds of Militancy
The Soviet incursion was rolled back and the Martial Law was lifted with the mysterious death of Zia ul Haq following a blast in the plane on the tarmac. The Talibans took over Afghanistan, but communal fires engulfed Pakistan. Shortly thereafter, the Anjuman e Sipah e Sahaba that rose from Jhang found access in the National Assembly in Islamabad. In the mid-90s, a militant faction of the Anjuman became the cause for international shame and infamy for Pakistan. It is now actively engaged in triggering violence under several names in Syria, Iraq, Afghanistan, Pakistan and several other countries and is toplisted among the terrorist organisations in the region. Now whenever Jhang is referred to, Lashkar e Jhangvi’s is the most prominent image that appears on the mental screen, rather than the Heer-Ranjha, the sandbanks of Chenab or the accomplishments of scientist Abdus Salam.
This winter when I wanted to visit Jhang, I could only conjure up a desolate town as not much details were available online too. A local boy whom I took as a guide, took me to the innards of the town through a maze of narrow streets and enabled me to spot the house where the Nobel Scientist once lived. It was rather a good, pucca house which appeared robust and could be entered through a sturdy door. A plaque from the Department of Archaeology informed me that the house was now a national memorial. A middle-aged man opened the door as I knocked upon it and invited me inside. He was Mohammed Ismail, the caretaker of the house appointed by the Department of Archaeology of the Government of Punjab. He was a bit of historian too. He told me that the house attracts 15 to 20 visitors everyday and groups of local school students too are brought in to the place in order to sharpen their quest for study of science.

Disowning
The school where Abdus Salam had his primary education is situated closeby. He topped in the Matriculation exam conducted by the University and found himself in the newspaper headline. He had been enrolled in 4th standard in the Government High School Jhang City in 1934. The school now preserves the admission register for 1934-38 when Abdus Salam was enrolled here. Even his classroom has been kept in its pristine form. The walls of the School’s office, library, science lab, and corridors now display several photographs of Abdus Salam although most people in Pakistan tend to disown him due to his being a Qadiyani.
The plaque of the National Memorial set me thinking as to what kind of absurd joke is it that while the house of the scientist has been elevated to the National Memorial, the original occupant of the house is a controversial figure. Undoubtedly, Dr. Abdus Salam did Pakistan proud with his scientific achievements. Rather he should be top among the people who imparted sound footing to the study of science in Pakistan. But look at how shabbily we treated him inasmuch someone tampered with the plaque on his grave.

Heartening News
The former Pakistani Prime Minister Nawaz Sharif’s declaration that National Centre for Physics in the Qaid e Azam University in Islamabad will be named after Dr. Abdus Salam was a heartening piece of news. But soon thereafter his son-in law Capt. Safdar squared the pitch by spewing venom against the Nobel Scientist on the floor of the Assembly and even demanded revoking the declaration. It again set me thinking if anyone would dare to observe the 21st death anniversary of the great scientist and intellectual, which fell on November 21.
We have heard about a lamp lighting another lamp. But how could this be expected in Pakistan,”
when they have covered this lamp deliberately? Alas, the role of Abdus Salam is not the part of the national discourse in Pakistan. Perhaps majority of the younger generation is not even aware of his name. How could they know that a school master’s child from the old locality of Jhang graduated up to touch the pinnacle of Science to pluck the prestigious Nobel Prize? And, how would they know this when they are repeatedly told that he was a Qadiyani and Qadiyanis are kafir!
(Note: Translated by Islamic Voice from Urdu feature on thewireurdu.com. Aoun Ali is a photojournalist based in Lahore and writes mainly on historic personalities and edifices.)