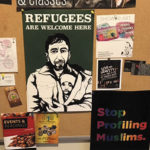 When it comes to mass discrimination, history has not been kind to people of Jewish faith. That’s why the local chapter of Jewish Voice for Peace has taken to solidarity with what it believes to be persecuted refugees and those of Muslim faith, even if it is as simple as a sign that says “Refugees are Welcome Here.” “As Jewish folks in particular, we really want to stand in solidarity with those who are being targeted, including Muslims and all people of color,” said Wendy Elisheva Somerson, a founding member of Seattle’s chapter of the Jewish Voice for Peace. Artist Micah Bazant, from the national Jewish Voice for Peace branch in New York City, created the “Refugees are Welcome” art, which depicts a man with an infant huddled in his coat. The impetus actually came from the rise in Islamophobia that stemmed from 9/11, when a different kind of registry was created for Muslims immigrating from other countries, as well as the Syrian refugee crisis earlier this year.