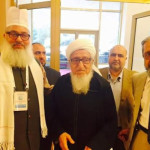 Istanbul: In its continued effort to reaffirm the global Muslim unity, the Presidency of Religious Affairs of Turkey, in association with the Directorate General of Foreign Affairs and Department of Muslim Countries and Communities organised the First Asia and Pacific Countries Muslim Religious Leaders’ Summit last month. This 4-day international event brought together Muslim clerics from Asian and Pacific countries in Istanbul. Aimed at establishing global unity among Muslims, the event started on October 12, in Sultan Ahmed Mosque (Blue Mosque). The summit will go down in history as the latest bid by the state-run organisation to enhance universal brotherhood and fraternity of Muslims the world over. The summit was titled, “Unity in Multiplicity: Rethinking Hikmah (Wisdom) and Peace Together”. Nearly 125 religious leaders from 37 countries, from Afghanistan to Australia and to tiny Pacific nations participated and presented their views and papers in this summit. Some crucial topics among them were: Muslims at Regional Level: Challenges, Solution Suggestions and The Possibility of Cooperation, The Challenges with the Religious Education and Services in Islamic Institutions, Solution Suggestions and the Possibility of Cooperation. The New Movements of Thought in Islamic World and Their Adverse Effects on Muslim Nations in Asian-Pacific Countries. Common Challenges Facing Muslim Minorities and the Future of the Muslim World.