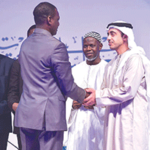 Sheikh Abdullah Bin Zayed Al Nahyan, the UAE’s Minister of Foreign Affairs and International Cooperation, and Shaykh Abdallah Bin Bayyah, President of the Forum for Promoting Peace, have awarded the 2016 ‘Imam Al Hassan Bin Ali Award for Promoting Peace’ to the Central African Republic (CAR)-based National Interfaith Peace Platform (NIPP), in recognition of its approach to violence-prevention. The award was presented at the 3rd Forum for Promoting Peace in Muslim Societies, which concluded in Abu Dhabi on Dec.20. NIPP was named as winner of the award for its significant role in rebuilding the community and promoting values of peace through direct communication with the citizens in mosques and churches, following the civil war which broke out in the CAR in 2012. Among the honorees were NIPP leaders, including Archbishop Dieudonne Nzapalainga, Imam Oumar Kobine Layama and Pastor Nicolas Guerekoyame-Gbangou. Addressing the awards ceremony, Sheikh Abdallah Bin Bayyah said: “Fire is raging in many of the Muslim communities around the globe. We are acting as extinguishers”¦the fire extinguisher leaves no stone unturned to completely extinguish the flames and this is exactly our mission. We’re not asking people for to explain their dilemma, doctrine, call of duty or religion. We ask them to do one thing: stop fighting. We believe that putting an end to wars and paving the way for peace is the essence of justice and the top priority of life”.