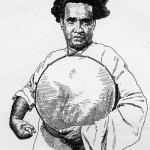 Bhima-Neera Vikas Sanstha, Indapur, Maharasahtra, celebrated the birth anniversary of the revolutionary poet Amar Shaikh. This programme is held every year to identify the talented grassroots level workers and encourage them by giving awards. Amar Shaikh, whose original name was Meheboob Shaikh, was born on October 20, 2016 at Barsi, Solapur. He was a talented revolutionary poet. He worked as a cleaner in a truck. At the age of 16, he met Mahatma Gandhi in Kolhapur. He recited patriotic poems celebrating the praise of the Mahatma. Gandhiji was so impressed by his poems that he gave him the titled of ‘Amar Shaikh’. Amar sheikh died in an accident at Indapur. His fans came together and have established an organisation to honour social workers at an award function every year for the last 30 years. Poona College Principal Dr. Nazeruddin gave away the awards. Presenting the awards, Dr. Nazeruddin said anything done with dedication and perfection is worship. He likened the work of the organization with worship and exhorted the members of the organization to continue to serve the people with devotion. (Reported by Malika B. Mistry from Pune)