Seminar on Woodcarving Industry
Saharanpur: The historic woodcarving industry in this town of Uttar Pradesh is in pathetic state. The extremely talented woodcarving artisans here have been reduced to mere daily wage workers while the traders who collect the produce and export the handicraft items lap up huge profits. These views were expressed at a seminar organized by the Handicradfts Artisans and Exporters Association in the second week of July. The seminar was organized by V. P. Singh Memorial Society, Lucknow. President Abdun Nasir said the artisans were not receiving even the subsistence level wages. Deputy Commissioner of the UP Industries Department, Smt. Anjurani introduced the welfare scheme started by the UP Government.

Juffali’s Expensive divorce
Sixty one year Saudi sheikh Walid Juffali’s divorced wife Christina Estrada, aged 54 won a court case against her husband from a British court which awarded her 53 million pounds. She had demanded 196 million pounds. Walid had divorced her under Islamic law without her knowledge.

Child Marriages Banned
Banjul: Gambia, which has a 90% Muslim population banned child marriage in the first week of July. Anyone marrying their below-18 children will be jailed which may extend to 20 years. Nearly a third of girls in the country are married away before they turn 18. People who are aware of the child marriage, but did not inform the authorities too would be punished with 10 year jail sentence.

Mass Marriages for Muslims
Running an association called Khalandariya, Khadri has roped in wealthy members of his community to fund these mass marriages. 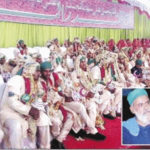 Mohammed Anwar Khadri (62) is an unassuming social worker from Shimoga, Karnataka. He hosts mass marriages for poor Muslims. An agriculturist and owner of a small timber yard, Khadri quit his comfortable profession two decades ago and became a social worker after making a promise to his “baba”. “Fifteen years ago, I visited Hazrath Qalander Shah Peer Baba at his abode, where lakhs of devotees come from across the country. I stayed there for almost a month as a devotee and volunteer. One day, Baba spoke to me personally and made me pledge that I would strive to wipe the tears of the poor, without discrimination.” Today, he tries to fulfill that promise by conducting mass weddings by “living by his words. Atma mein parmatma (‘God lives in everyone’s soul’),” he says. “Since then, I have never looked back,” he said. Running an association called Khalandariya, Khadri has roped in wealthy members of his community to fund these mass marriages. The association has 2,000 members as of this year. Following a screening of the prospective couple, the families of the bride and groom are called separately to Shimoga, and given a choice of five sets of clothes, with a gold chain for the marriage ceremony.
(Extracted from timesofindia.com)