“Compensate Those Wrongly Convicted”
The report points out how providing adequate reparations is a duty of the state. 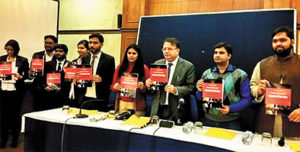 New Delhi: “Media must refrain from pronouncing terror-accused as ‘guilty’ till a formal pronouncement is made by the court, and a rights-based approach should be adopted by the State to grant compensation to the victims of wrongful actions of the State”, a Jury led by Justice A.P Shah, former Chairman of Law Commission of India, said at a press conference in Delhi on December 10. Justice Shah was speaking at the release of the Jury report based on the People’s Tribunal on Acquitted Innocents in terrorism cases, which was conducted in October.
Apart from Justice A.P Shah (Ex CJI Delhi High Court, Chairman of the 20th Law Commission of India), other members of the jury included, noted filmmaker Saeed Akhtar Mirza, G.S. Bajpai (NLU Delhi Registrar), noted journalist Neena Vyas, Delhi School academic, Nandini Sundar, TISS Deputy Director, Abdul Shaban, journalist Vinod Sharma and Advocate Monica Sakrani.
“The amount of compensation must be decided on a case to case basis taking into account both pecuniary and non-pecuniary losses,” the jury said in its report.
On October 2, 2016, Innocence Network India had organised the first People’s Tribunal on Acquitted Innocents in terrorism cases, which saw 15 innocents from across the country depose in front of the jury. “The depositions (on October 2) explicitly make clear all that is wrong with the criminal justice system when it comes to dealing with cases of terrorism. The Jury, while recognizing the need for the State to provide compensation to the victims for their wrongful conviction, identified different stakeholders involved in the entire process of arrest and acquittal,” the report said.
The wrongful prosecution did not result from mere technical errors or genuine human lapses in investigation, but from willful and malicious investigation and prosecution, the report said. “The testimonies laid bare the excessive powers granted to the investigating agency under the anti-terror legal regime,” it added.
The report points out how providing adequate reparations is a duty of the state and falls explicitly within its justice framework. It issues clear guidelines for a comprehensive legislation for compensation and rehabilitation for those who have been wrongfully prosecuted/convicted.
Other speakers at the event included Manisha Sethi of Jamia Teachers’ Solidarity Association and Wasif Haider, who was falsely accused in a terrorism case by the UP police and was one of the Innocents who had deposed before a panel.
(Extracted from twocircles.net)