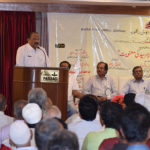 Roshan Baig, Minister for Urban Development and Hajj, regretted that a Muslim youth born to a Libyan couple had killed 22 persons in a suicide bomb attack on a theatre in Manchester.
Bengaluru: Speakers at a seminar on social reformer Sir Syed Ahmed Khan came down heavily on conformism and called for innovation of thought and methodology for progress and development. The seminar organized by the Karnataka State Urdu Academy on May 25 became the venue for calling the Muslims to change their ways and be in step with the times. The seminar was to synchronise with the bicentenary of Sir Syed Ahmed Khan, the progenitor of Aligarh Muslim University.
Stressing the need to feel the pulse of the time, Prof. Shafey Kidwai of the Dept of Mass Communication of the Aligarh Muslim University said, Sir Syed had perceived the internal strength of the Western civilization being based on knowledge and values and had very well anticipated its expansion in decades ahead. He had also keenly studied the deficiencies and weaknesses that had crept into the Muslim populace which had led to the decline of the Mughal empire. He had therefore urged the Muslims to study English, adopt science and technology and learn the organization and management from the West. In order to advance his campaign for modernization of Muslims mind, he had to often keep the colonial administration in good humour, but it was not intended to please them but was to gain their support for his mission. “Had he confronted them, his mission would have been doomed,” he opined.
Kidwai said Sir Syed Ahmed was aware of the pitfalls of the democratic governance and had exhorted the community to develop excellence in order to overcome the weakened status in a democratic India. Sir Syed did not call for a ban on the book by Sir William Muir which had disparaging remarks about the Prophet Muhammad. He met Muir when he visited Allahabad and wrote a book rebutting his remarks on reaching the United Kingdom.
Mr. Roshan Baig, Minister for Urban Development and Hajj, regretted that a Muslim youth born to a Libyan couple had killed 22 persons in a suicide bomb attack on a theatre in Manchester. He said Saudi Arabia does not confer citizenship on a single Muslim (let alone non-Muslims) despite expats working there for 40 years. But countries in the West not only conferred the citizenship, allowed people from all over the world to move there and take citizenship, set up businesses, contest elections, buy homes and take up leadership positions. He said Muslims need to ponder over all these and appreciate the openness of the civilized world and be thankful and grateful to democratic and plural democracies and stop following ways of the conservative and orthodox leadership.
Baig said Sir Syed Ahmed Khan was a modernizer and urged the State Urdu Academy to make a documentary on him to convey his message to the youth who are averse to reading books.
Anees Ashfaque, a retired IPS officer from Lucknow, in his paper said Sir Syed established a triangle of ‘meaningfulness of education’, ‘religious vision’ and ‘superiority of intellect’. He said he was not born into the new age, but was born in the old age to create a new age out of it. Prof. Maula Bakhsh from the Aligarh Muslim University opined that Sir Syed understood the culture distinctly from religion and the rift between the two. He was keenly aware of the strength of prose and chose it as the medium of expression and had the conviction that only prose would change the fortunes of the community. Urdu litterateur Masoom Aziz Kazimi said Muslim community was afflicted with two syndromes, Victory syndrome and Victim Syndrome. Victory syndrome triggers vainglory while victim syndrome provokes cribbing and grieving over its current plight.
Broadcaster Milansar Athar moderated the discussion. Former Union Minister K. Rahman Khan inaugurated the seminar. Urdu Academy Chairman Mr. Azeezullah Baig welcomed the participants.
(Report by Maqbool Ahmed Siraj)