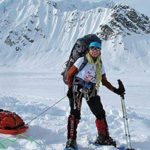 A Chinese Muslim woman from Northwest China’s Xinjiang Uyghur Autonomous Region has successfully scaled Mount Everest. Ma Liyamu, a Muslim from Jichang Hui Autonomous Prefecture, Xinjiang, started doing outdoor sports in 1996, but concealed her career from her other family members except her father, until the media widely reported her in 2015. In 2015, she was severely injured in an avalanche at her base camp in Nepal as she was preparing to climb Everest. But after recovering, she geared up again and successfully reached the top of Everest last May. From being an amateur climber, and later a coordinator for a mountaineering firm, to running a high mountain trekking agency, the 47-year-old woman has been persistent in her efforts despite suffering obstruction in this male-dominated industry. She set up a trekking company and founded the first China Women’s Everest Team the next year.