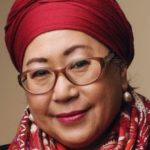 Dr Jemilah Mahmood and her team were on their way to deliver medical supplies to a children’s hospital in Iraq when they were trapped in a crossfire. Two people died, another two doctors were injured. Dr Jemilah was shot in her hip. She stitched herself up, left the bullet in. Today, Dr Jemilah is the Under Secretary General for partnerships at the International Federation of Red Cross and Red Crescent Societies (IFRC), the world’s largest humanitarian group with over 190 national societies and 17 million volunteers, who together strive to help and save those stuck in wars, natural disasters and health emergencies.
Dr Jemilah’s career in the medical sector began as an obstetrician and gynaecologist. But, it was a conversation with her son that sparked her love and interest in being a humanitarian. That night her life changed. She was watching television with her five-year-old son, explaining to him about the war in Kosovo and telling him that children there were starving due to the war. His immediate response was, “Mum, you are a doctor, go and do something.” That was the beginning of Dr Jemilah’s journey as a humanitarian. She quickly applied to various humanitarian organisations volunteering her services and only Doctors without Borders responded., Dr Jemilah asked her husband why Malaysians don’t give importance to humanitarian causes. That’s when her husband told her that if she felt so strongly about it, she should start an organisation. In 1999, Dr Jemilah started MERCY Malaysia with the main objective of providing medical relief for vulnerable communities in both crisis and non-crisis situations. MERCY Malaysia sent five missions to Kosovo during the war in 1999 to provide mobile medical care. MERCY Malaysia had so little funds when they first started, to the point that their volunteers had to pay for their own airfares to fly into the Kosovo war zone. In the same year, the organisation also sent relief teams to Turkey to help victims of the 1999 Izmit earthquake. MERCY’s medical team was also the first to arrive in Aceh, Indonesia, during the December 2004 tsunami. To date, MERCY Malaysia has sent its team and aid to many war-torn and disaster areas in the world including Somalia, Turkey, Gaza, Sierra Leone, and Musan County in North Korea to name a few. Calling her childhood home a “mini United Nations”, the 58-year-old doctor revealed that she was raised by kind and generous parents who taught her a great deal about helping those in need.