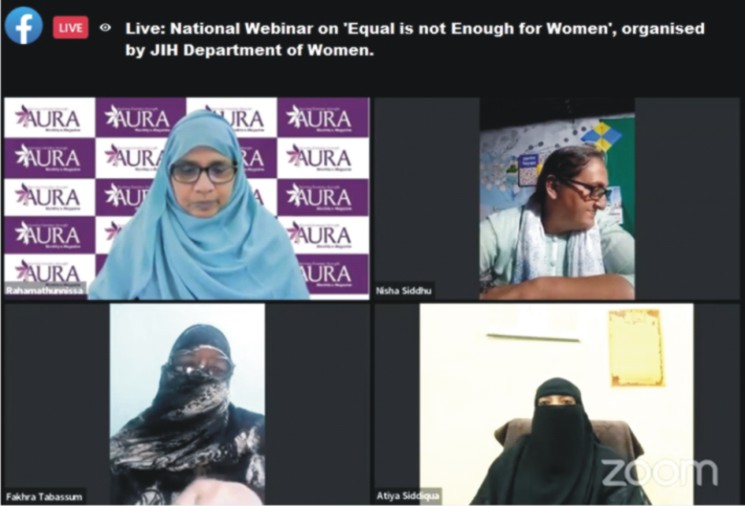 Equal is not enough for women

In her opening remarks, JIH Women’s Wing Secretary Mrs. Atiya Siddiqua emphasized the importance of moving beyond equality to a paradigm of justice. Professor Poornima Pattanshetty, an educationalist, Ms. Noor Mahvish, a law student; Ms. Jaya Dwivedi, a social activist, Dr. Sufiya Fatima, a member of the All India Muslim Personal Law Board (AIMPLB) and Clinical Psychologist, Dr. A Ramlath, a Psychologist, and Ms.Nisha Siddhu, NFIW, were among the distinguished female speakers. The latter focused on practical issues of women’s dignity and more abstract ideals like equality, equity, access, and dignity in their speeches.

Young speakers delivered emotional testimonies on how the distinction between boys and girls is created at a very young age in families and how femininity becomes an insult in colloquial talks.
Speakers from the sphere of social activism discussed how difficult it has been to explain women’s injustice from the ground up. The need to not gloss over the fact that women face exceptional problems and have different biological, mental, emotional, and social requirements was a common thread that ran through all presenters. The presenters also discussed the legal implications.

Putting together a summary of the various speakers’ points of view, Mrs. Rahamathunnissa, Secretary of the JIH Women’s Wing, has also proved that the statement “can women do it all?” is false.

Instead, he contended that women could achieve things that men are not. She claimed that they did not compete with mankind because the Creator created them differently in form and needs.

However, she did agree that for women, the need to establish themselves and gain acceptance was a double burden. She emphasized the importance of continuing education for all beings, regardless of gender, from cradle to tomb.