Sahla Nechiyil never dreamt of a perfect, fairytale wedding. But when she decided to get married, she also sent across a social message to the “gold-obsessed” community in Malappuram. 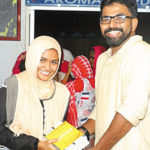 How often do you see a woman demand books as mehr, and not the customary jewellery or gold. In Kerala’s Malappuram district, a woman set an example for her community. A post graduate in political science from the Hyderabad University, Sahla Nechiyil never dreamt of a perfect, fairytale wedding. But when she decided to get married, she also sent across a social message to the “gold-obsessed” Muslims in Malappuram.
Nechiyil decided to demand 50 books from her fiancÃ© as mehr. She asked for books as mehr because of two reasons. “One, because according to the religious texts, a girl can demand anything she wants and the groom cannot disagree. And second, because I wanted to show the Malappuram Muslims that a wedding can take place without obsessing over the amount of gold transacted between both parties,” she said.
Her husband (they got married on August 11) cannot agree more with Sahla and supported her stand wholeheartedly. “Mehr is the right of the woman, not the generosity of the man,” he said. Anees Nadodi was promptly given a list of 50 books by Nechiyil, and he went all the way to Bangalore to find all the books that she wanted. All this amidst much disapproval from both the families. In Nechiyil’s case, however, more than her parents, her relatives disagreed. “They could not argue for long, because we were not doing anything against the religious texts,” said Nechiyil.
Nechiyil demanded a list of books that include Islamic feminist literature, feminist literature, fiction, politics etc. “The religious texts allow us to live according to our wish, yet these girls fear to speak up or decide for themselves,” she said. ” Anees had to struggle a little looking for the books I demanded. Making your husband struggle a little is the idea of mehr, anyway,” she added.
Anees, on his part, enjoyed the “book-hunt” his wife had organised for him. He went to Bengaluru’s popular Blossoms, Gangaram and Bookworm bookstores looking for the rare titles that Nechiyil had meticulously listed.