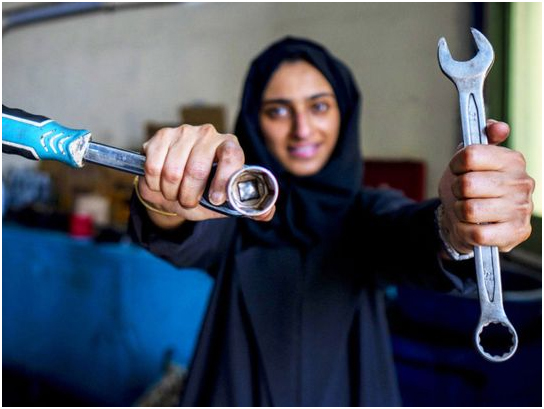 Huda Al Matroushi, 36, from the UAE, was overwhelmed with emotion after she received a phone call. It was from Sheikh Mohamed bin Zayed Al Nahyan, Crown Prince of Abu Dhabi. He congratulated her for making her presence felt in a job that is otherwise dominated by men.
Al Matroushi is a car mechanic who owns her own garage, Imex Car Service, in Sharjah (UAE). In an interview with Gulf News, Al Matroushi said her happiness knew no bounds when the Abu Dhabi Crown Prince said he was proud of people like her. She said she was in tears when he asked her if she would accept his car for servicing in her garage.
Al Matroushi has broken gender stereotypes to follow her passion.She works for a Sharjah government department during the day, while in the evening, she is seen holding bolsters and pliers, tirelessly repairing cars parked in her garage. So how did this come about?
“When I was young, I used to be curious about toy cars. I wanted to understand the mechanics behind them,” Al Matroushi said.The garage she and her father built is a result of Al Matroushi’s dream. With accessories such as wrenches, ratchets, screwdrivers hanging from the wall, this Emirati woman is defying all odds to follow her passion. “I love what I do. I started doing it 16 years ago, but I opened this garage in 2020,” she said.
Elaborating on her garage, Al Matroushi said: “When I asked my father to help me build the second floor of my garage, he asked me if I was sure of what I was doing. He said it was a tough job for a woman to handle. I told him it was not tough for me. My staff also sometimes tell me not to dirty my hands, replacing a tyre or checking the level of oil and water in the engine. But I keep telling them that there is no difference between a man and a woman today. Both are equally capable of doing any job.”
Sticking to her roots and her attire
Al Matroushi insists on wearing an ‘abaya’ while working in the garage. She says she really does not find it a hindrance. “It is practical for me to wear an ‘abaya’ as the material is no different from an overall that mechanics usually wear,” she said.

(Extracted from an article in Gulf News)