Islamic Voice 0 July, 2019 12:00 am
The Spiritual Role of Women
Beyond Purdah
Women Free To Marry Of Their Will: Saudi Scholar

Mariyam Khatoon, the widow of Alimuddin Ansari, has been living a sorrowful life since the time her husband was lynched to death in June, 2017 by a mob on suspicion of carrying beef in Jharkhand. Just while Khatoon and her family were trying to cope up with the unexpected misery, her eldest son, Shehzad, passed away in January 2019, after they couldn’t afford medical treatment for him.
On June 29, 2017, Alimuddin Ansari (55), was transporting meat in his van from Chitarpur area of Ramgarh. Suspecting that Ansari was carrying beef, a group of cow vigilantes attacked him and set his van on fire before lynching him in full public view at Bazartand locality in Ramgarh. A video of the incident later went viral on social media.
Almost a year later, a special fast track court, set up by the Jharkhand High Court (HC), awarded life imprisonment to 11 of the 12 accused on June 21, 2018. However, within a month of the conviction, 10 of the 11 convicts were granted bail by the HC. Also, Khatoon was given a compensation of rupees seven lakhs by the HC. However, no amount of money can compensate for the irreparable loss of Khatoon at the hands of the Hindutva right-wing fundamentalists.
Just recently, in February 2019, Khatoon said that the government had abandoned them after fulfilling half the promises. She said, “The government abandoned us after fulfilling half the promises it made. We were assured jobs and a ration shop (under the Public Distribution System), but nothing has happened till now. I used to keep doing the rounds of government offices. But I have stopped now,” she says. It is not about monetary compensation, she adds, but having a stable source of income.
With no end to her agony, as per the information received by us, now Khatoon’s son, Shahbaz (18) is critically ill and admitted to the hospital. On contacting Khatoon, she told us that Shahbaz has undergone a surgery yesterday after a hole was detected in his intestines. She thus requires money for his further treatment.
On asking about the promise of giving a job, Khatoon said that after the death of her eldest son, who was to get a job, she took her other son, Shahban (19), to the government office pleading that he be given a job. Though all the documents were submitted, Khatoon hasn’t received a reply from the authorities yet!
Khatoon says that she will not be able to bear one more grave loss in her life. Thus, on behalf of Khatoon, Sabrang India appeals to everybody to help her in her hard times. Following are
Khatoon’s bank details:
Name: Mariyam Khatoon
Bank Name: Union Bank of India 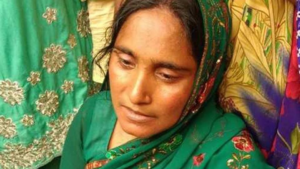