Islamic Voice 0 February, 2018 12:00 am
The Lost Legacy of Female Muslim Icons
UAE’s First Female A380 Pilot
Why Can’t I Be Just another Woman”¦ But With A Headscarf? 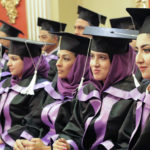 The first batch of Women Studies graduates in Afghanistan received their degrees at Kabul University recently. Kabul University is the first university of Afghanistan to offer a Masters degree in Women and Gender Studies, teaching feminist theories, media, civil society and conflict resolution in its two-year programme. The programme is funded by South Korea and run by the United Nations Development Programme (UNDP). Among the 22 students graduating this year, were seven male students. The programme testifies to a considerable change since the years of the Taliban regime when female issues were taboo and women were largely confined to their homes and banned from education. Even now, after the toppling of the Taliban, women remain second-class citizens in the largely patriarchal country.