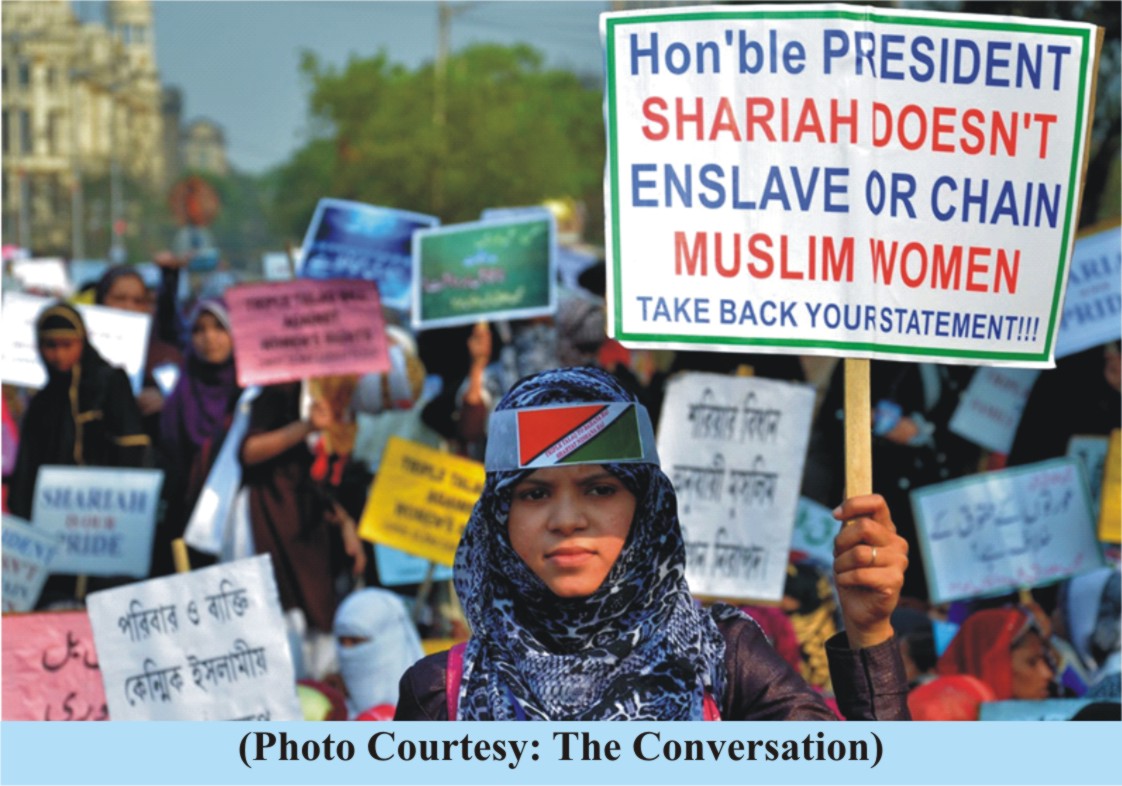 A mother is a school. Empower her and you empower a great nation.
– Hafez Ibrahim, Egyptian poet

A non-Muslim woman goes to her Muslim neighbour and asks if she could borrow a copy of the Quran.

“Of course, “says the Muslim. “We’ve got plenty! Let me get you one from my library.”

A week later, the non-Muslim comes back to return it.

“Thanks so much,” she says.“It’s really fascinating. But I wonderif you gave me the wrong one, could you give me a copy of the other Quran?”

“Yeah, I read this,” replies the non-Muslim. “But I need a copy of the Quran that’s followed by Muslims.”

The joke is right. All this talk about the oppression of women is not what the Quran says!

The portrayal of Muslim women in the media is grim and sombre. The public perception of them is one of the stubborn stereotypes: supposedly powerless and oppressed, bereft of even fundamental rights.

This picture keeps reinforcing itself, largely because this is how the Western media caricatures women in Islam. Recurring images beamed into our homes and phones keep strengthening the belief that Muslim women are being denied access to education, social space, privacy, and educational and development programmes for socio-economic uplift.

It has also reduced Muslim women to a stereotyped singularity, plastering a handy cultural icon over much more complicated historical and political dynamics. This powerfully flawed narrative dominates our newsfeeds. It overshadows the reality that nine Muslim women have led their countries in the last three decades, while the US couldn’t even elect its first real female presidential candidate in 2016. In many Arab countries and Iran, more women are in university than men. In Egypt, women make up a larger percentage of engineering and medical faculties than women do in the US.

It is true that in societies trapped in poverty, illiteracy, and ignorance, women continue to receive abominable and oppressive treatment. But then, this is true of all societies. Muslims cannot be singled out for such a flawed social order. This distortion, however, should not deflect our focus from some path-breaking and stellar contributions of Muslim women, not just to Islamic civilization but the secular society as well.

Muslim women across South Asia are slowly getting empowered to stand up to patriarchal practices that undermine their dignity. In literate societies, Muslim women, like their counterparts in other creeds, are an empowered community. They believe that rights have been accorded to them in foundational Islamic texts, but that interpretation of these same documents with the prevalent cultural lens disallows what is rightfully theirs. They do not call this a feminist struggle but describe it as a reclamation of their faith.

Muslim women’s activism around education and equal opportunities are often underpinned by their emancipator readings of foundational Islamic texts. They are also challenging the patriarchy that all women experience around unequal power hierarchies in society and the objectification of women’s bodies in some sections of the media. In this regard, they stand with their sisters of all backgrounds.

Although traditionally excluded from the male public domain, Muslim women have been privately involved in the study and oral transmission of Islamic source texts (the Quran and Hadith). In modern times, they have entered both secular and religious forms of education with enthusiasm, supporting their long-standing role as family educators and moral exemplars, as well as training for professional careers in the workplace outside the home.

Central to Islamic belief is the importance and high value placed on education. From the true Islamic point of view, education should be freely and equally available to women as much as men.

Islamic scholar Sheikh Mohammad Akram Nadwi’s epic work al-Muhaddithat: The Women Scholars in Islam, stands as a riposte to the notion, peddled from Jakarta to Morocco, that Islamic knowledge is men’s work and always has been. “I do not know of another religious tradition in which women were so central, so present, so active in its formative history,” Akram writes. Women scholars taught judges and imams, issued fatwas, and traveled to distant cities. Some made lecture tours across the Middle East.

Good and to forbid what is Evil. None of the inspired women who were strong, vocal, and fighting for their rights felt that their faith was at odds with their conviction that they, as women, should be equal citizens.

Islam anticipates the demands of western feminists for more than 1,000 years. A stay-at-home wife can specify that she expects to receive a regular stipend, which is not that far from the goals of the Wages for Housework campaign of the 1970s.

Elsewhere, the fully empowered Muslim woman sounds like a self-assured, post-feminist type, a woman who draws her inspiration from the example of Sukayna, the brilliant, beautiful great-granddaughter of Prophet Muhammad. She was married several times and, at least in one of her marriages, stipulated in writing that her husband was forbidden to disagree with her about anything.

All these conditions are based on the canons of Islam and early Muslim practice. A Muslim woman cannot be forced to enter into marriage without her agreement; indeed she has the right to revoke a marriage to which she did not agree in the first place.

We now have an inquisitive and empowered generation that will not easily accept rules and codes without reasoning them out and arguing on every strand before embracing them.

Few Muslim women outside the urban areas may want to behave like western women. The high rate of divorce and sexual disease are common consequences of the reckless drive to equate the sexes and “free” sexual relationships.

It is important to point out that, until 100 years ago, western women had virtually no rights in law or practice. Over 1,000 years before the first European suffragette, Islam gave far-reaching rights and a defined status to women.

Muslim women certainly do not share the western notion of feminism. These women do not accept that being feminist means being western and believe that western women should be respectful of other paths to social change. Western thinkers and practitioners must reconsider their assumptions about the role of Islam in women’s rights and approach this topic with a more nuanced lens.They must understand the necessity of recognizing and consciously accepting the broad cultural differences between western and non-western conceptions of autonomy as well as respecting social standards that reflect non-western values.

Women are now elbowing their way into political and civil society, and universities. Despite present cultural and political obstacles, they are finding opportunities to rise and to bring their societies up with them. They feel the key is to do so within Islamic paradigms.

The protagonists of the western brand of feminism should heed what then First Lady Michelle Obama expressed to hijab-wearing students when she told them: “You wonder whether anyone ever sees beyond your headscarf to see who you really are, instead of being blinded by the fears and misperceptions in their own minds. And I know how painful and how frustrating all of that can be.”