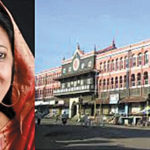 Haseena Faras (61) of the Nationalist Congress Party (NCP) was elected the mayor of Kolhapur in Maharashtra on December 8. She stood for municipal elections last year defying the fatwa against Muslim women contesting the municipal election. The fatwa had been issued by the Majlis e Shoora Ulmae Shahar. She represents the Nationalist Congress Party of India. This is for the first time that Kolhapur has a Muslim Woman mayor. Arjun Mane of Congress was elected the Deputy Mayor. The Council has 42 women among 81 members.