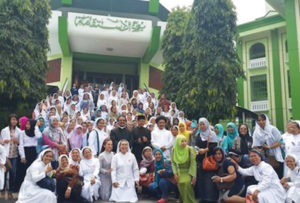 Java: A group of Catholic nuns and Muslim women in Ungaran in Indonesia’s Central Java province have formed the Sisterhood of Interfaith Women to promote tolerance and peace in the world’s most populous Muslim nation. The group formed the Sisterhood of Interfaith Women following their March 9, meetings held at Christ, the King Church and Jami’ Istiqomah Mosque, which is adjacent to the church. About 400 women, including about 130 nuns, participated in the event. “We, women from different religious backgrounds, realize that a true sisterhood is the desire of each person. Thus, we commit to move and to continue moving so as to become promoters of peace according to our own faiths, religions and beliefs,” they said in a statement. The meeting was facilitated by the Semarang Archdiocese’s commission for ecumenical and interreligious affairs.
Divine Providence, Sister Yulia Marselina Silalahi, who coordinated the meeting, said Catholic nuns and Muslim women are natural allies. “We are actually the same. We both wear veils; we both have the desire of building a true sisterhood. That’s why we hold such a dialogue. There’s no way that we can respect our differences if we don’t sit together in dialogue,” she told ucanews.com. (ucanews.com/news)