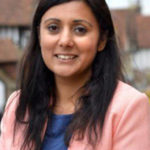 London: The first female Muslim minister, parliamentarian in the United Kingdom, Nus Ghani spoke from the British Parliament dispatch box.Soon after her first speech in the House of Commons, she tweeted that: “Made my debut as @transportgovuk Minister and made a bit of history as the first female Muslim Minister to speak from the House of Commons dispatch box.” She addressed the House of Commons as a junior minister in the Department for transport. In her statement, she said that “The roles are both exciting and challenging opportunities. Transport is a subject on which I have campaigned passionately since being elected as the MP for Wealden. Alongside my ministerial duties, I will continue to be a strong voice for Wealden and deliver for my constituents.” Nus Ghani became the first Conservative party Muslim woman candidate in 2015, to be elected to Parliament. After her election in June 2017, she took her oath of allegiance to Queen Elizabeth II in Urdu. She said at that time that: “My motivation is simple. My parents are incredibly proud that I have been elected to serve as MP, and I wanted to honour my mother by speaking in a language she could understand”.