On Women’s Day – A Lesson on Courage

Islamic Voice 0 April, 2018 12:00 am
Importance of Recognising and Accepting Depression
Importance of Education in Islam and Educational Needs of The Muslim community
Moderate Malerkotla Shows the Way

The Urdu-medium Bombay Girls High School on Mohammed Ali Road celebrated womanhood with inspiring stories of women who succeeded against all odds. 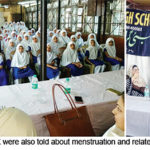 They come to their school on Mohammed Ali Road early in the morning from the slums of Wadala and Sewri, and when they return home, some of them must help in household chores like washing the clothes and cooking, before they can finally sit down to study. Sometimes, they have to skip school in order to look after their younger siblings. Playtime is an unknown concept. Some of them even admitted to not opening their books at all at home. We don’t feel like it, they said. And nobody at home cares enough to try and persuade them. On the contrary, there are some who will have to persuade their parents to allow them to continue studying till Class XII. Yet, their aspirations know no bounds. From teaching to fashion designing to becoming a doctor “ these are their dreams.
On this International Women’s Day, their hopes got a huge boost when they got to hear the success story of someone just like them at a program at their 50-year-old Urdu medium Bombay Girls High School. They learnt that giving up was not an option from one of their own.
Dr Roshan Jahan, daughter of a vegetable vendor, lost both her legs in a train accident when she was in Std XI. Debarred from getting into a medical college because she was 86 per cent disabled, she approached the Bombay High Court, fought a long-winded legal battle and won the right to study medicine in 2011. Last year, she completed her MBBS with a first class from the renowned GS Medical College attached to KEM hospital. The young doctor was the special guest at the function. “Never give up on education,” she told the wide-eyed students, recounting her struggle. “Education alone will make you self-sufficient and take the community forward. Instead of wallowing in self-pity about discrimination, resolve to reach a position in society where no one can discriminate against you.” The Women’s Day program was organised by Reshma Momin, a former journalist, who now runs the Quresh Nagar Women’s Welfare Society. She too had been a shy, self-effacing teenager, she told the students, but her father had taught her to aim high. “Never feel you are any less than others just because you are poor and study in an Urdu medium school.”
(Extracted from mumbaimirror.indiatimes.com)