Islamic Voice 0 May, 2017 12:00 am
A New Cookbook!
Dr. Huda Al-Mansour – A Saudi Researcher with Ten Patents to her Credit
29 Women Nominated to Saudi Shoura Council 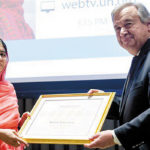 UN Secretary-General Antonio Guterres has selected Pakistani Nobel Peace Prize laureate Malala Yousafzai to be a UN messenger of peace, the highest honour bestowed by the UN chief on a global citizen. UN spokesman, Stephane Dujarric announced that the 19-year-old education advocate will focus worldwide attention on the need for all girls to go to school. Yousafzai became the youngest-ever Nobel laureate in 2014, when she was recognised for her advocacy of the right of all children to education. “Even in the face of grave danger, Malala Yousafzai has shown an unwavering commitment to the rights of women, girls and all people,” Guterres said. “Her courageous activism for girls’ education has already energised so many people around the world,” he explained. “Now as our youngest-ever UN Messenger of Peace, Malala can do even more to help create a more just and peaceful world.”