Zulekha Daud – From Nagpur to the UAE 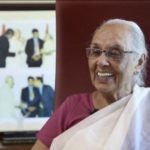 The Indian who became the first female doctor in the UAE when the city had barely any infrastructure.
Indian national Zulekha Daud is widely understood to be the first practising female doctor in the United Arab Emirates and has played a crucial part in transforming its healthcare sector. She met BBC Hindi’s Zubair Ahmed.
Dr Daud, 80, vividly remembers the day she was “parachuted” in to Dubai in 1963. “When I landed here, I found there was no airport. There was only a runway. The moment we got off we were hit by a wave of unbearable heat,” she recalls. Given the number of state-of-the-art hospitals it has now and its expansive healthcare system, it’s hard to believe that the UAE once had no proper hospitals and mostly borrowed doctors from other countries.
Dr Daud is a storehouse of memories of the time the UAE was crying out for medical help. The people were suffering from innumerable diseases, ranging from tuberculosis to diarrhoea. There was no female doctor to deliver babies and children were suffering from malnutrition.
“I had not even heard of Dubai before coming here. It was only after arriving that I realised how difficult the conditions were and how incredibly hard it was to carry on here,” she says. Many doctors who arrived with Dr Daud from other countries, such as Syria and Lebanon, refused to work under those conditions and went back home. But for Dr Daud there was a job that had to be done. “I realised these people needed me, so I just got down to work,” she says. She was trained as a gynaecologist, but the prevailing circumstances forced her to become a general practitioner in Dubai. As there was no other doctor available, she found herself attending to “burn cases, snake bites, skin diseases and everything else”.
Supportive Parents
Dr Daud’s journey from the western Indian state of Maharashtra to Dubai was not a planned one. She had applied for a post with an American missionary working in Kuwait soon after graduating from medical college in the city of Nagpur. She was flown to Dubai from there.
But how was a young and unmarried woman from a conservative Muslim society allowed to travel abroad unaccompanied? She admits it was unthinkable at the time. But Dr Daud says she was lucky to have supportive parents. “My parents had no formal education. But they were open minded. They encouraged me to go,” she says.
Her first job was in a makeshift hospital situated in a vast desert area mostly inhabited by tribal people. After working for a few months there, she was told that she would have to work in Sharjah, too, where her employers were going to start a small clinic. As her career progressed, she gained more and more recognition. Locals saw her as a “special gift” to their women and bestowed upon her numerous awards. Dr Daud’s rise to prominence coincides with the rapid growth of medical facilities after the foundation of the UAE in 1971. Today she owns three big hospitals, one of them a cancer centre in her home town, Nagpur in India.
“Once they founded the UAE they made rapid progress in all walks of life. I am a beneficiary of the rapid growth the country witnessed after independence,” she said. Dr Daud has huge respect for the people of the UAE. She says she has a special place in her heart for the country’s rulers who encouraged her to set up her hospitals.
After more than half a century of non-stop work, Dr Daud has finally decided to relax a little. She leads a “semi-retired” life now, spending only two hours a day in her Sharjah hospital. She still retains her Indian passport and has strong ties with her country of birth.
(Extracted from bbc.com)