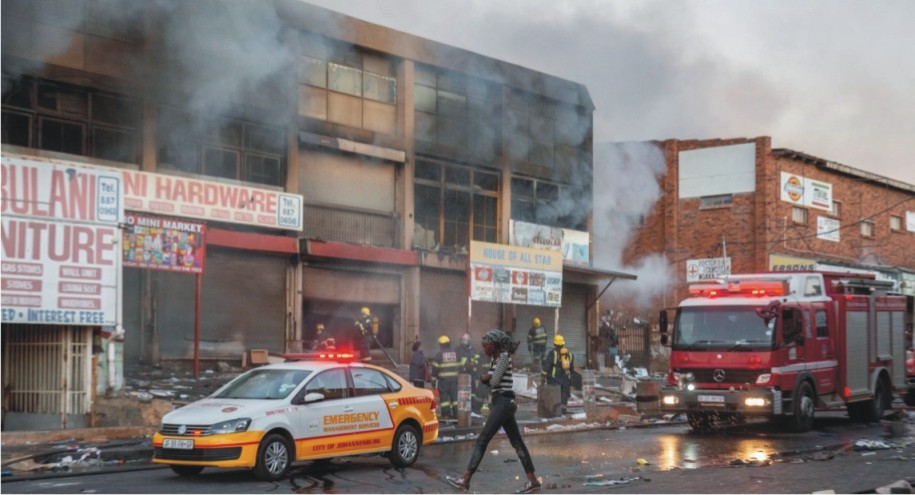 Political Opportunists and Criminal Elements Fanned the Flames for their Agendas 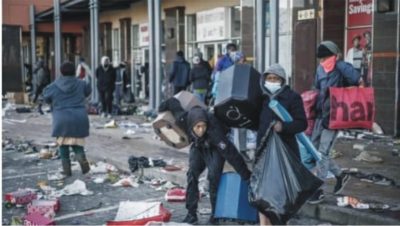 With specific reference to the weekend newspapers, South African News Media outlets sent out pictures of a South Africa that was recovering from a week of utter carnage, destruction, vandalism, arson, and unrestrained criminality.
The popular Sunday Times with the most extensive readership headlined its front page with “SA’s Broken Heart.” The City Press headline read: “How the State Messed Up” other headlines of relevance: “Looters hit the big and the small,” referring to the looting and destruction of small businesses and superstores, chain stores, and wholesalers.
The chaos in SA started with a blockade of the N2 and N3 highways in Kwazulu Natal by mobs who hijacked trucks and parked them across all highway lanes. Dozens of trucks were burnt near the Mooi River Plaza and other areas. The focus then shifted to Gauteng with mass action that blocked the M2 in Johannesburg. After that, the destruction intensified with the looting of malls, warehouses, shopping centres, and liquor stores.
The unrest followed the incarceration of former President Jacob Zuma for contempt of court. According to Police Minister Beki Cele, these actions were planned and well-orchestrated by provocateurs, instigators who wanted to make the country ungovernable, embarrass, and even remove incumbent President Cyril Ramaphosa. According to security sources, initially, 12 suspect instigators were identified, with the possibility of more being identified and arrested.
What was glaring was that the security forces were caught napping and ill-prepared when the carnage began. Officials admitted that even the intelligence services were caught off guard. Deputy Minister of State Security, Zizi Kodwa, said that the sheer scale of the looting and vandalism caught them by surprise. However, he said that when the insurrection commenced, the state security went into action by securing the safety of the Ports, water treatment plants, electricity grids, and other important and sensitive sites.
Estimates of the loss of property run into the Billions of rands. Malls and shopping centres will take months before they can reopen for trade. In the meanwhile, thousands of people have lost their employment. South Africa is facing enormous challenges of poverty and unemployment, and this incident has merely accelerated the problem faced by many families that often rely on a single breadwinner. Many expatriate businesses owned by mainly Pakistani, Indian, Bangladeshi, and others have lost their life savings because their companies are not covered by insurance.
There was also an imminent danger of racial conflict in certain Durban areas where Indian South Africans and Black South African communities faced each other. Indian communities organized their own foot patrols and roadblocks to prevent being overrun by looters.
There are many questions to answer by officials in government and the relevant state security departments. The chances of this recurring are genuine, and the government should read the warning signs. Political challengers coupled with economic and societal demands will not disappear. For the foreseeable future, South African society will have to brace itself to meet these challenges.
What is encouraging is that the population at large Black, White, Indian, and Coloured, have all condemned the actions of the minority. It is pretty clear that political opportunists and criminal elements fanned the flames for their own agendas, using the vulnerable to achieve their aims.
Humanitarian organizations, family businesses, community organizations, and individuals have rallied to assist the needy and vulnerable. Muslim organizations especially punched above their weight and can be seen everywhere delivering aid and assistance.