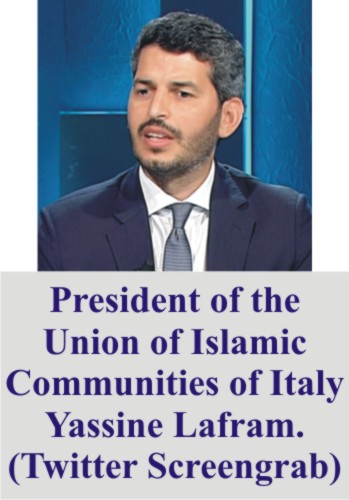 Lafram added that the union has been working assiduously to make effective the integration of Muslims into Italian society, in compliance with their own identities and cultures

ROME: Yassine Lafram was confirmed for a second four-year term as president of the Union of Islamic Communities of Italy. He received 80 percent of the votes collected from local Islamic communities all across Italy to elect him to the highest office of the religious body representing the Muslims of Italy.

Born in Morocco in 1985, Lafram has lived in Italy since he was six years old. A graduate in philosophy, he lives with his wife and three children in Bologna, where he has been leading the local Islamic community since 2014.

“My confirmation in office comes thanks to the great work carried out by the outgoing governing council, which has achieved decisive results for the Italian Islamic communities in the past few years on important issues,” Lafram said.

He added that the union has been working assiduously to effectively integrate Muslims into Italian society, in compliance with their own identities and cultures and with the principles of the Italian Constitution.

He recalled several protocols signed with Italian government ministries to prevent radicalization in prisons and regulate access to mosques and prayer rooms after the first lockdown in 2020.
Lafram confirmed most of his previous directors in office and added younger ones in the union’s governing body.