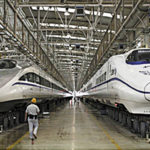 (The photograph is only for representational purpose.)

Prime Minister Narendra Modi has said that we are getting the Ahmedabad-Mumbai Bullet train almost for free. But the facts are totally at variance with the claim. The total cost for the Project which entails some under-the-sea tunneling and some elevated track, is pegged at Rs. 110,000 crore. Of this, Rs. 88,000 crore are coming via loan from Japan.
The IIM-Ahmedabad has released a report titled “Dedicated hi-speed Railway Network in India: Issues in Development”. According to this report prepared by G. Raghuram and Prashanth Udaykumar, the loan repayment will begin when the Bullet Train completes 15 years of operations. The interest rate applicable is stated to be 0.1%. The IIM-A report says, if the Railways decide the fare for this 300-km journey at Rs. 1,500 in the 16th year of its operation, the Bullet Train will have to carry 88,000 to 110,000 passengers daily in order to be able to repay the loan with interest in time. To carry these many passengers, the Bullet Train will have to make 100 trips daily. Only then the loan will be repaid on time. Now, one can imagine if it would be possible for Bullet Train to be a viable proposition and if would be able to make a hundred trips in a day.
According to Mr. M. K. Venu who writes for the wire.com, the repayment will be far more than Rs. 88,000 crore because the Indian Rupee is constantly losing its value in exchange to the more world powerful currencies. While Japanese Yen is stable, our Rupee has been depreciating all through at the rate of 3%. So after 15 years of operation of the Bullet Train, it might fall much lower than what obtains now. So given the history of depreciation, we may have to return a far higher amount than Rs. 88,000. Going by 3% fall in value of the Rupee, the repayment may go up to Rs. 150,000 crore.
Now this repayment is all about Mumbai-Ahmedabad sector. We are talking about having similar Bullet Trains in North, South and Eastern India under the Diamond Quadrilateral Network. So you can imagine the quantum of burden of international borrowings. Naturally all this burden will be shifted to every child getting born today and will be aged between 15 and 18.
Some people might think that 0.1% of interest is next to nil. But again this is a fallacy. The Japanese banks offer only 0.04% of interest on Government bonds. The Indian banks offer 6.5% interest. This difference between our and Japanese banks is due to the fact that Japanese banks are flush with funds. This is why Japan wants their money to be put to use and in circulation and bring back dividends. Besides this, we will be purchasing a lot of material for the Bullet Train tracks, rolling stock and coaches from Japan itself. All that it means is that Japan is in win-win situation while we are caught in no-win situation.
Dr. E. Sreedharan, the chief architect of the Delhi Metro Rail, which was built and operationalised three years earlier than its target schedule under his stewardship, says, India is still not ready for Bullet Train operations. He says the Indian Railways will not be ready for at least 8 to 10 years hence, for this kind of technology. The current state of Indian Railways is quite unstable. We keep hearing of frequent derailments and crashes.
The Railway Minister prior to Mr. Suresh Prabhu (who was given another portfolio recently), had said that the Indian Railways immediately needs Rs. 120 lakh crores to refurbish the track, improve the services and put in new coaches on the entire network in the country and to ensure security and safety of the services.
The issue of Bullet Train needs to be seen in this background. We need Rs. 120,000 crore for the upgradation of the existing services while the nation is spending Rs. 110,000 crore on putting up a Bullet Train on a small sector of the network.
Now that this IIM-A report highlights the fallacies about the Bullet Train, most of us will be able to understand what priorities stare into the eye of the nation, and what the Government has decided to go ahead with.
(Source: Transcribed by a staff writer from Vinod Dua’s presentation on wire.com)