Islamic Voice 0 August, 2018 12:00 am
Karate Champion from Kolkata
Zaineb is on a mission to plant 1 lakh saplings across India
Supercomputer by 22-year Lad

Al Ameen is on a Kashmir-to-Kanyakumari bicycle campaign against child abuse. 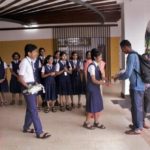 Kochi: Heavy rain accompanied by strong wind was what received 19-year-old Al Ameen in Kochi, long before he could pedal his way to Rajagiri Public School for his formal reception.
The two receptions, the other being at Al-Ameen Public School, were among the five stopovers in the city over two days for the second-year sociology student from the Jamia Millia Central University, who is on a Kashmir-to-Kanyakumari bicycle campaign against child abuse.
Having popped antibiotics after getting beset with stomach upset and vomiting, the lashing rain further took its toll on the weakened body of the youngster who is originally from Kazhakkoottam in Thiruvananthapuram. In fact, he was admitted at a hospital in Karnataka for a day before entering Kerala.
However, that didn’t douse the spirit of Al Ameen who mounted the cycle from Srinagar on June 2 with the noble intention of creating awareness among students about the need to stand up against abuse of varied hues against them.
“I also wanted to encourage students to actively participate in finding solutions to the problems faced by the community around them,” said Al Ameen who had been clocking around 80 kms a day. He was briefly joined by his college mate Shigraf Zahbi in the Delhi-Rajasthan stretch before giving it up owing to hostile climatic conditions.
Asked why he opted for cycling to propagate his cause, the youngster said that the nobility of the cause alone would not win the attention it deserves unless combined with some extraordinary act. “For me, cycle is just the tool to attract attention to my larger goal,” he said.
Before his stopovers at five schools in the city, he had been accorded receptions at schools in Thiruvananthapuram, Kollam and Alappuzha. The receptions were organised by district child protection officers of the Women and Child Development Department.
He will meet students of more schools in Malappuram, Kozhikode, Vadakara, Kasaragod and Manjeshwaram before wrapping up his campaign in Kanyakumari on July 23. by which time he would have covered around 4,250 kms.
(www.thehindu.com)